Believe it or not, we got a little bit of snow Saturday night into Sunday morning!  The weather man said we could get between four and six inches of snow, but we ended up only getting a slight dusting of snow.  It did stay cold for most of Sunday and only got to about 37 degrees.

Today, Monday, the weather was a bit nicer.  The sun was out in its fullness and the temperature got up to about 57 degrees.  The rest of the week is to be around the same temperatures; higher 50's, with rain every other day.

In the "Square Foot Gardening" book, it says that the peas can be planted three inches apart from one another.  To me, that is way too close.  On the package, it says to thin to six inches apart.  So, I went between the two and chose to plant them five inches apart.

The area between the garage and house was 200 inches long, so I was able to sow 41 peas in this area.  I pushed the peas down about 3/4 the length of my thumb – which is just a little less than two inches – and then covered them back up.

The area behind the garage was 320 inches long, so I was able to sow 65 seeds there.  That makes a total of 106 pea plants!  I hope we get quite a lot of peas for the season.  We will be freezing the whole peas with the pod (since these are snow peas and the pods are edible).  It would take too long to get the peas out, and there is no reason to since you can eat the pods anyways.  One of my favorite chinese dishes uses the full pods, which is where I got this idea to plant peas. 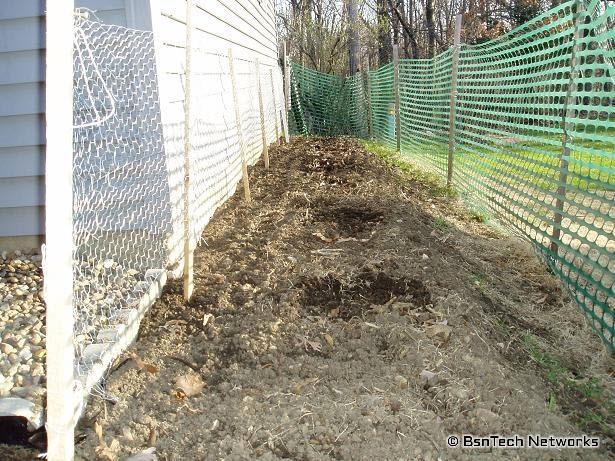 Later on this same area will be used to grow the tomatoes, so I'm trying to get a harvest of peas in before that.  Later in the year, probably late July/early August, I will plant another set of peas in the other garden area (between the house and garage) to get another harvest just before the winter comes in.

You can also see the green fencing on the right side of the picture.  This was also put up today.  You can see in the background that we have a forest preserve, so we have quite a lot of deer that come up into the driveway and the yard.  I used the fence last year and it did a great job keeping the deer out – and we had the tomatoes here and corn between the house and garage during that period.  The fence is four-feet tall, but the deer don't jump it since it is so close to a structure.

As in the previous post, I noted that I wanted to get some pictures of the Macon County Compost Facility.  I had to go back to the compost facility to load up many containers of compost.  We went to the in-laws house on Sunday and dumped two car loads of compost.  So, the area where the corn will be planted is ready to be tilled (couldn't since it was rainy and wet Sunday in their area).  So, here is a picture of part of the compost facility.  There is a lot you can't see here, but you mostly see the new mounds of leaves that are less than a year old: 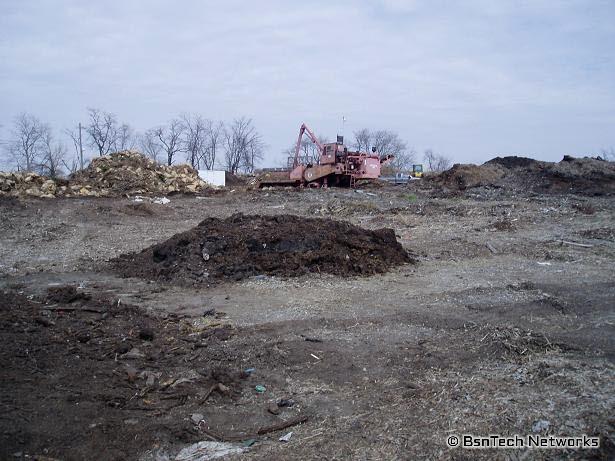 Just to the left of the picture was the small mound I was getting the manure mix from.  I pretty much used the whole mound with filling everything around the house.

Lastly, here is a picture of one of their tractors turning a pile of leaves/compost that is less than a year old.  You can see all the steam coming off the pile since compost heats up while it is decomposing. 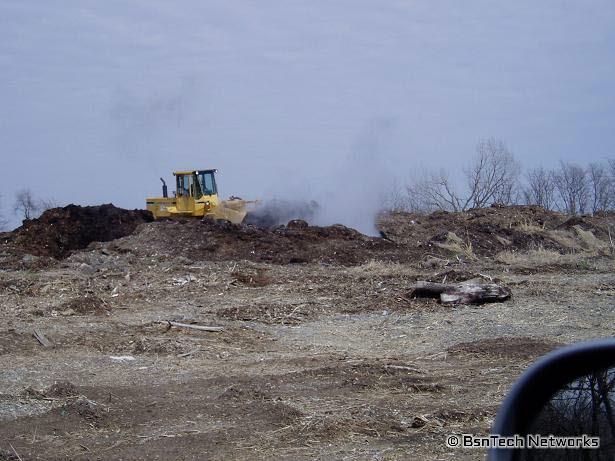