So far I have discovered that celery is clearly a very picky seed to get started.

Finally after 18 days, only two of the six celery seed from the first planting (12 weeks before the last frost) sprouted and came up.  Originally, this seed was just directly planted right in the containers with about 1/4 inch of soil over the top of them.  So, this is about 33% seed germination.

The same was done with the celery planted 11 weeks before the last frost – one seed per square and directly seeded 1/4 inch under some soil.  Unfortunately, zero of these have sprouted.

Now, here comes the interesting part.  I read several places that by soaking seed overnight, this helps to break the hard casing of seeds.  I gave it a try and then I planted two seeds per square in 12 squares (between two black six-packs) for the seeds planted 10 weeks before the last frost.  The seed was also placed right on top of the soil (although by watering, the seed may have been covered by a very thin layer).  Some folks said that celery needs sunlight to grow – so I opted to place them on the surface.

The growing area ranges from about 57 degrees at night with the fluorescent lights off – to about 68 degrees during the day after the lights are on and warmed up.

Amazingly enough, so far 11 of the 24 celery seeds have sprouted!  That is almost a 50% germination rate.  And the interesting thing to note is that these have all germinated in 7 to 8 days.  That is a big difference compared to the 18 days it took the first two seeds.

So by experimenting with the Ventura Celery seed, it paid off.  I now know that one of two things caused the better germination rates and faster germination:

To further experiment and to provide some insurance against seedlings dying, I am planting another 24 seeds tonight because I need a total of 16 celery plants to go into the garden this year.  So, I am going to plant two seeds per square in 12 squares.  However, I'm going to further experiment by planting one six-pack with the seeds about 1/4-inch under the soil.  The other six-pack will have the seed placed right on the surface – just like this previous bunch.

By doing so, this will tell me which is true – whether it is the soaking of the seeds that makes the difference – or if it is the fact that they must be sowed on top of the soil.  If the seed that is planted 1/4-inch under the soil germinates just as good as those planted directly on top, this will tell me that it was the soaking of the seeds alone that allowed for the better germination.  But, if those seeds sowed 1/4-inch under the soil do not come up as well, this says that you need both to place the seed right on top of the growing medium – and to soak the seeds overnight. 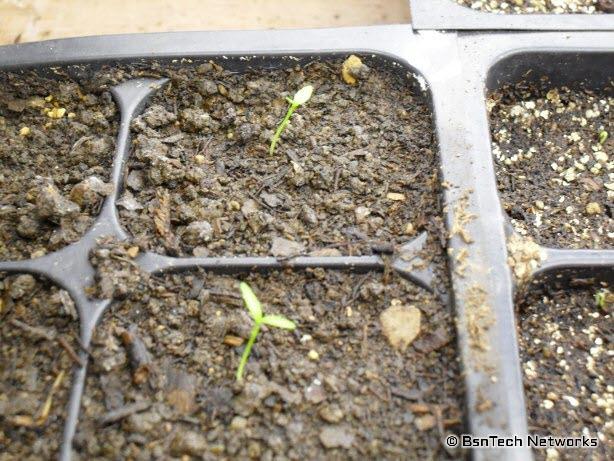 Here is a closer look of one of the seedlings.  My camera just does not do a good job of getting close-up pictures so I'm not impressed with how some of these turn out.  But, there is a dark spot at the end of the seedling – and that is the actual seed itself. 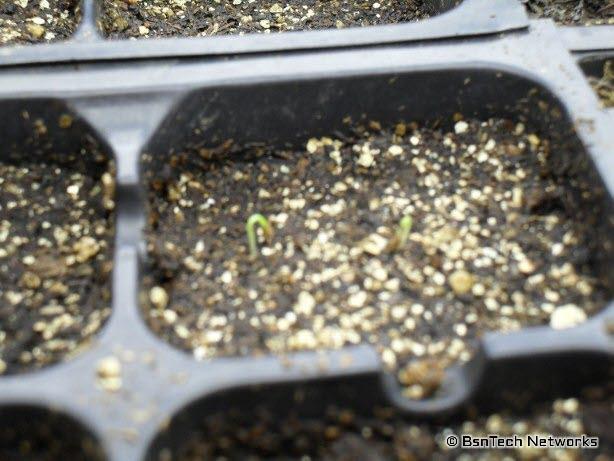 It seems that the Ventura celery needs to have a combination of being soaked overnight and also placed right on top of the growing medium to grow.  So it very well may be true that celery seed needs light to germinate.  I did mist the containers about every other day, but there have been four new celery that have sprouted from those squares where the Ventura celery was placed right on the surface.

None of the seed that was planted 1/8-inch to 1/4-inch deep have sprouted as of yet.

Tags (to allow others to find this site):