Last time I just updated the "A new project" post with the update.  However, this time, I opted to make a new blog entry for this update.

The project is almost fully completed.  Unfortunately, it has turned off very cold for almost the past week and I am unable to pour the concrete for the last of the six posts for the project.

In addition, I have some other "goods" that I am awaiting to fully finish off the project as well – but everything has been setup from what I am able to do right now with the weather and the materials I have.

So, what is the project? 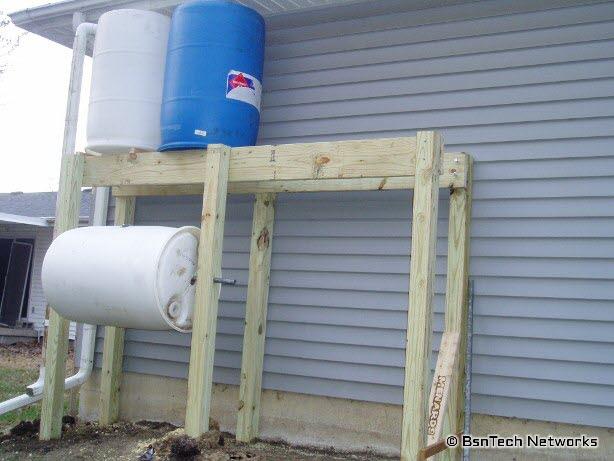 I call it the Rain Water Tower & Compost Tumbler.  Well, you can surely see at the top – those two barrels that I previously tested for water next to the house.  I didn't like the fact they were in plain view and they looked very ugly.  Plus, I was going to be limited to one more rain barrel in that spot.

In the new spot behind the garage, it is out of sight – and this will allow expansion of up to two additional rain barrels – a total of four all together to hold approximately 220 gallons of water.

What is very nice about this Rain Water Tower is that it gets it off the ground by five feet so it will help the water pressure.  In addition, there are only two downspouts on the back of the garage – one of them is visible on the left side of the picture – and the other one is all the way on the other side of the garage (not shown).  Because of this, I am going to close off the other downspout so that 100% of the water from a 24 x 24 foot garage is diverted into the barrels.  This should provide more than enough water coverage to fill the barrels up.

The basic structure consists of six 4" x 4" x 8-foot long poles and two 2" x 8" x 8-foot long boards that are under the barrels.  It is treated wood to make it last longer as well – no way would I make this out of untreated wood as it wouldn't last with all this water!  I then used some 6-inch by 1/2-inch lug nuts and put two in each post.

Underneath the rain barrels is the first compost tumbler I made a few weeks ago.  I just cut the original 1/2" galvanized pipe and placed a small piece on one side of the barrel and then a piece twice as long on the other side.  This way when I receive the next barrel, I can just cut a hole in both the top/bottom of the barrel and stick it on the one piece of galvanized rod and then cut a smaller piece to place in the other post.  There is plenty of room under the compost tumblers to get a wheel-barrow – so I can just pull a wheel barrow up, open the compost bin, and let it dump out!

Here is a side-view of the Rain Water Tower and Compost Tumbler: 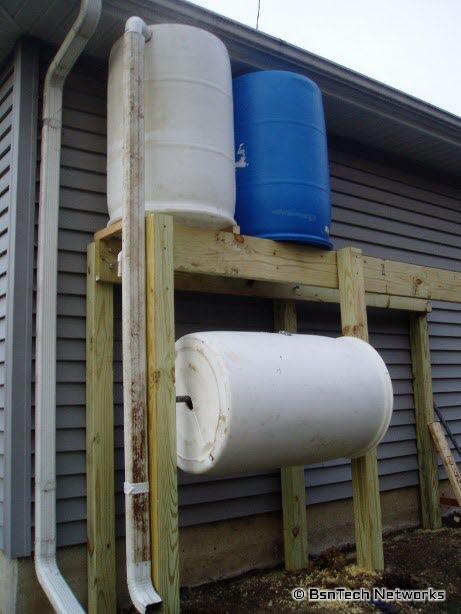 You can see the main downspout that comes off the roof of the garage.  It is currently tied into drain to the ground and not through the collection system.  Then, you can see the overflow downspout I made that ties into the first rain barrel that is used when all of the barrels are full.

I'm pretty happy with the results and how it turned out.  It doesn't take up too much room either – the whole structure is 8 foot long by about 2 feet wide.  I placed the two posts 16.5 inches away from one another – and then I placed the 2×8 boards inside the posts – so the two boards are only about one foot from one another.  I opted to put it this close to give the rain barrels more "bite" in the wood – helps to spread the weight over more of the barrel's area and the board's area to manage the load.

I did have to put the first barrel about 2 inches higher than the second and any other consecutive barrels – I just placed a 2×2 piece of wood under both sides of the first barrel.  This was done so I can try to maximize the amount of water in the barrels.  With the 2" cut-out for the overflow line, this would effectively remove at least 10 – 15 gallons of water amongst the full four-barrel system.  By pushing the first barrel higher, it will allow the other three barrels to fill almost fully to the top before the water begins out the overflow pipe.

So, there you have it.  I think I am about done on this project until it warms up sometime next year (except for adding the two additional rain barrels and the one composter).

If there was one thing I would have done differently – it would have been to use a 3/4" PVC pipe that stems out from the 2" PVC pipe underneath the barrels.  This is because I would use 3/4" PVC pipe to the ground – where it would then split off into two 1/2" PVC pipes for the garden – one would go all the way to the front yard and the other would do the garden against the house and the garden against the garage.  By making the main feed line 3/4" instead of 1/2", it would have allowed greater water throughput if I had both lines going at the same time.