Nothing going on this week around the garden.  I haven’t picked anything from the garden this week.  It has been in the high 60’s, low 70’s this week and it is beginning to slowly get cooler.  Luckily we have not had our first frost yet so the tomatoes and peppers are still on the plants.

However, this post is just about the rain barrel system (again).  A recycling place here in town has the blue 55 gallon barrels for sale for $10.  Over the past few weeks, I have purchased three barrels – which is the maximum capacity for the entire rain collection system.  Our garage is 24 feet square – and the barrels are just under two feet wide.  Therefore, a total of 12 barrels with a maximum capacity of 660 gallons of water can be held.

Nine barrels have been used all summer – so now I’ve added the final three. 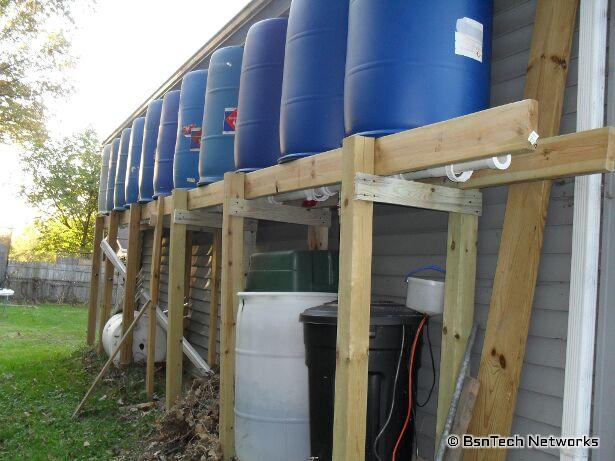 Above is a side view of the system.  There is still one at the very end (on the right side) that I have not put up yet.  This is because the downspout prevents me from putting the last barrel in place because of an elbow at the top.  After I take this out, then I can put the last one in.  You can also see some 1×4 pieces of wood that are holding the posts together.  Over the year, I did notice that the posts seemed to be moving apart from one another.  Several people on YouTube also commented and told me I needed to tie the posts together.  So, this should help strengthen things up for now. 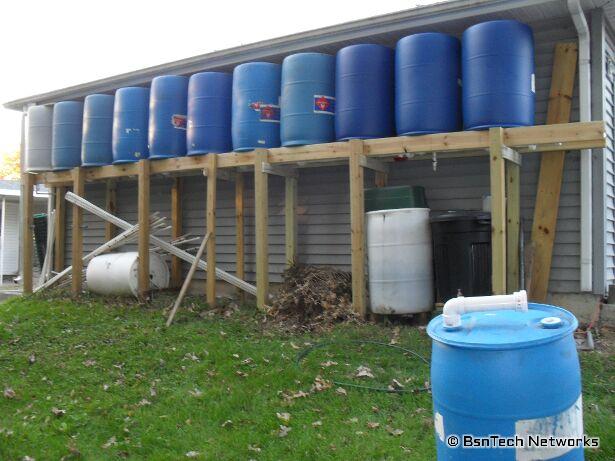 In the photo above, you can see a front view of the barrels.  The one on the ground very close in the picture is the last one that will go on the end on the right-side.  You can see the elbow downspout on the right side which is preventing me from putting the last one in place.

Another thing I had to do today was to re-level the horizontal wood supports.  Over time, it seems that the posts near the garage wall settled and went down about 1 – 2 inches.  So I had to take down that 2×6 board that was next to the garage wall.  I then put the 1×4 supports in that tied the posts together – then re-drilled and put the 2×6 board back in place.  Now it is level across the top once again.  Hopefully the settling is all finished because I don’t know how many more holes I can drill!  This is my fault though – because I should have used concrete.  But, it was taking a lot of concrete to fill the holes – so I only filled the first three or four holes when I first started the system last year about this same time. 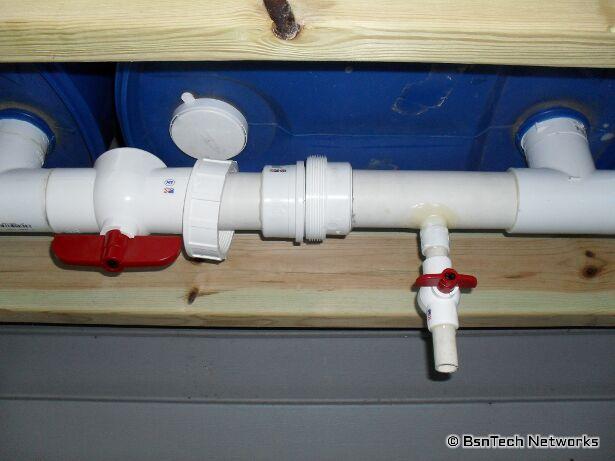 And lastly – I have some new items that I added on!  Yes, I very HUGE 2″ ball valve was added.  Why did I do this?  Well, in case I want to add compost tea directly into the mix, I will now have three barrels to the right of the ball valve (and nine to the left of the ball valve).  This will allow me to open/close the flow of compost tea if I use it for this use.  It is also nice as well because if I have a leak somewhere in the three new barrels, I can just shut off the flow and fix the leak.  Sure, I will still lose three barrels of water, but that is better than all 12!

Then, you will see a small 1/2″ ball valve pointing down.  What’s this you might ask?  Well, notice that it is to the right of the ball valve.  So, that means that I can use this pipe directly to tap into the compost tea.  If I want to fill my watering can or a sprayer with compost tea, I can do so right there!  Right beneath the spigot is another 55 gallon drum that is filled with dead plant materials.  I can also use the ball valve to dump water directly into the barrel with all this dead plant material to make compost tea!

I had to cut a 1″ hole in the 2″ PVC pipe to connect the ball valve.  I am REALLY hoping that this doesn’t leak!  I got lucky and I did the same thing on an elbow.  I drilled a 1″ hold in a 90-degree 2″ elbow and then put a 3/4″ threaded PVC pipe into it – which then leads to the actual pipe to get the water from the system.  I had to use a lot of PVC cement to ensure this was fully leak-proof – and it worked.  So, I’m hoping that I can get lucky a second time around by basically doing the same thing – except this time it is in a straight piece of 2″ PVC pipe.  If it leaks, then I’ll have a mess on my hands with trying to fix it up.

So, the rain barrel system has been fully completed.  When I first started out, I surely thought four barrels was going to be enough.  Then I added two more to make six.  Then I added three more to make nine.  Even with nine, I still had about a week period of time where I ran out of water!  So by adding these last three barrels, this should give me enough water for those extended periods without water – and the three barrels can be dual-purpose – either for water or compost tea!