April is now gone – with all of the rain that it brought!  Temperatures seemed to be much cooler this year than last – so hopefully that means our summer will not be as hot as it was last year.

Originally the plan was to make a post earlier last week, but several other things had to get accomplished first.  So this morning, camera in hand, new photos were taken around the garden.

The big change this week are a few things.

Yesterday, the wife & I spent most of the day working the front flower bed.  Because we live on a hill, a lot of last year’s work on making the flower bed eroded away.  So, some 10-inch tall by 1-inch thick treated lumber was purchased to put along the curb.  That way the entire area could be filled in – and be at least ten inches deep.  That will give the flowers more room!  Well, and, uhh – the broccoli and cauliflower that also moved in (hey, maybe some green beans later too!). 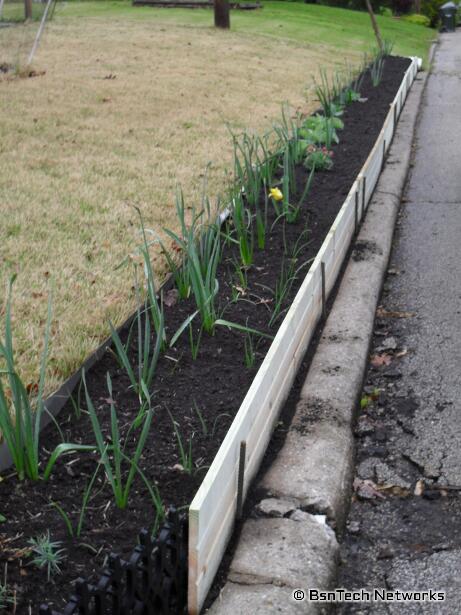 The rebar doesn’t look pretty.  Maybe we’ll get it painted. 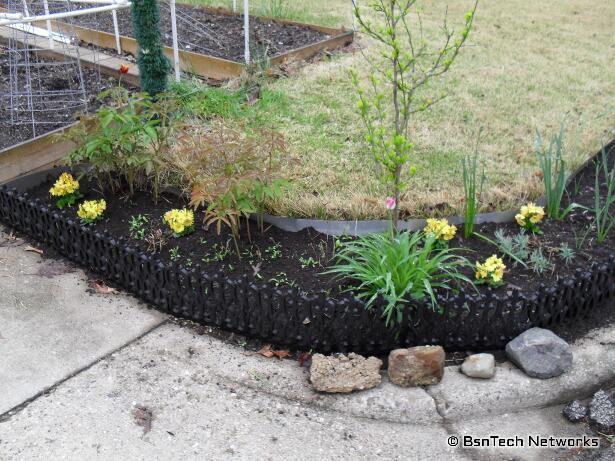 The other big change that happened – was, well, the deer got to some of the tomato plants.  Unfortunately, they were planted out too early – so they were dug up and put in one-gallon ice cream buckets (as seen in the last blog post).  I left them outside one night since it was getting better out – and the deer ate off the tops of them. 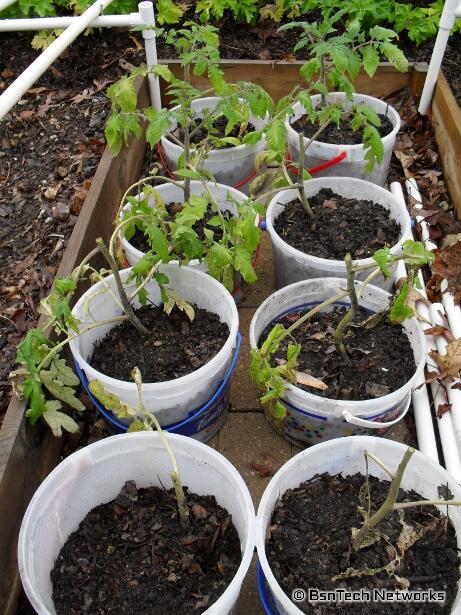 So, for the first time, I had to buy tomato plants.  We went to the local Rural King store and got four Better Boy tomatoes for $1.90 after tax.  They wanted $3.50 for ONE tomato plant – but it certainly was about twice as large.  Oh well – tomatoes will just be a bit later this year, but that is how it goes.  I wasn’t going to pay $15 for four tomato plants.  Also in the picture below are the Crimson Sweet watermleon that are finally growing.  It took two weeks to germinate – and six of the eight have come up.  I only need three, so three can be given away. 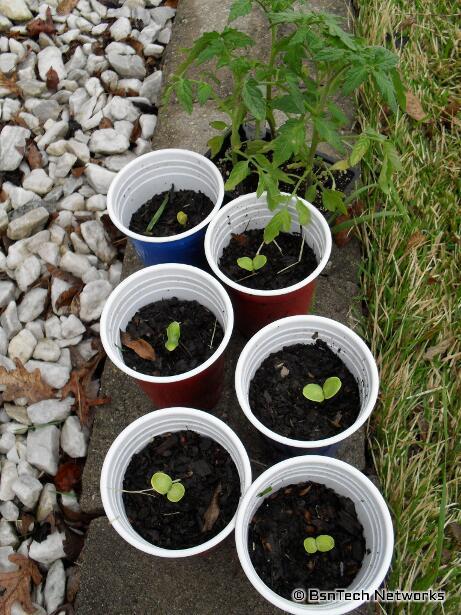 From there, it is just a walk around the yard now!

Here are the two Anaheim Hot Peppers in the tote up by the patio.  They have remained outside for the past couple of weeks and have done well.  Of course, I could put the lid over the top of them on the cool nights. 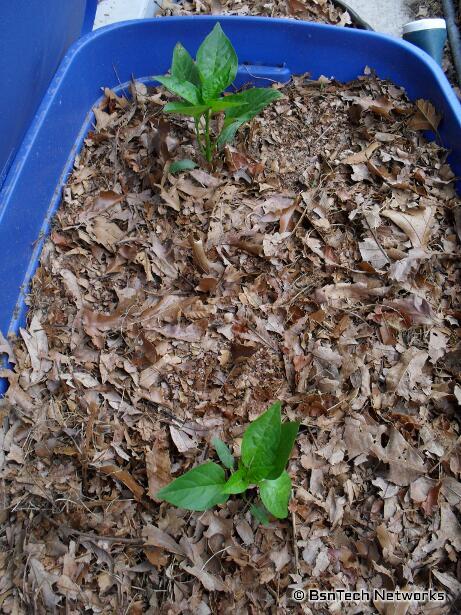 The patio garden is coming along.  There are four rows of radishes in the front, a patch of oregano, and all of the lettuce in the back.  The California Wonder peppers are in the middle in black plastic containers.  Those will be planted soon (along with the tomatoes). 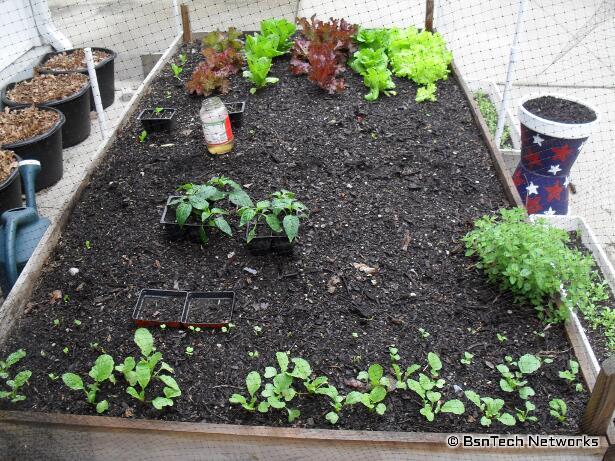 A closer look at the lettuce.  The lettuce on the very right is two months old and some of it is ready to harvest!  Note to self for next year – start at least two or three rows at the same time because one row just isn’t going to cut it for salads! 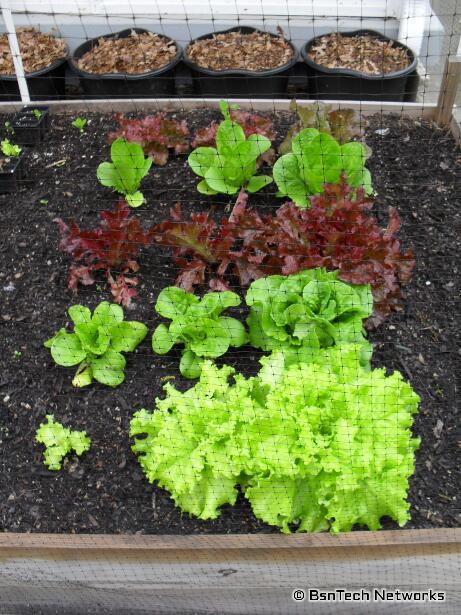 The carrots are still coming along.  They have been planted for about a month now and it took about two weeks for them to sprout. 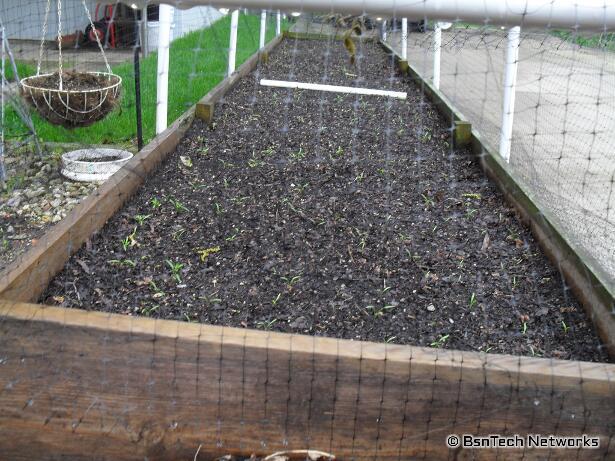 The side garden is doing well.  The peas, broccoli, and cauliflower are planted here.  Yukon Gold potatoes were planted down the center – but none of those have sprouted yet (been like two weeks!).  There are other volunteer potato plants coming up though. 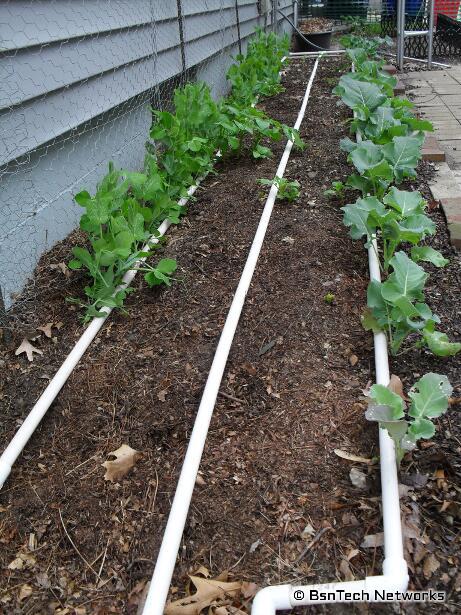 And the back garden still looks pretty bare.  Yukon Gold were planted along the row by the peas – and the other two rows towards the outside were planted with Kennebec.  Still, none of these have sprouted either. 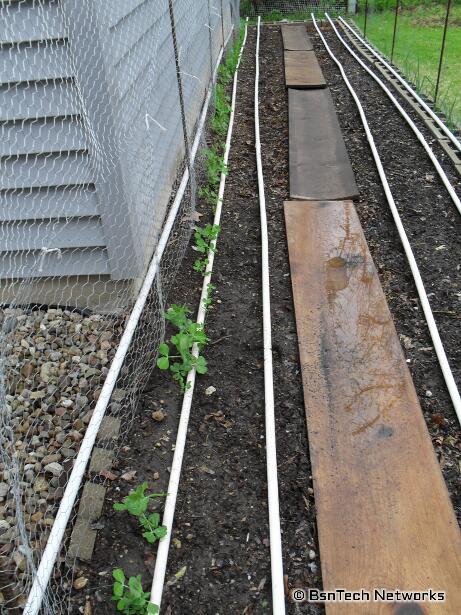 Now to the front yard.  The celery is doing fantastic – well, in the front of the picture anyways.  Towards the back of the picture, they are not doing too great.  At least we’ll have some celery to harvest this year since last year was bad.  The onions are also growing too – but they’d better hurry because another 1.5 months and the summer solstice comes – and it will be bulbing time! 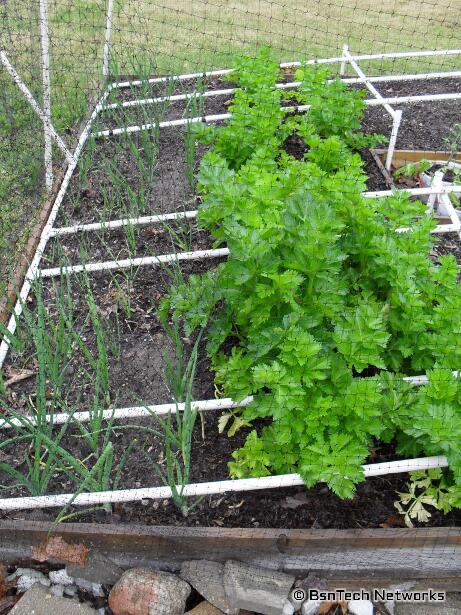 And lastly – the Tri-Star strawberries.  They are doing very well in the strawberry pyramids.  You can see all of the white flowers on the plants. 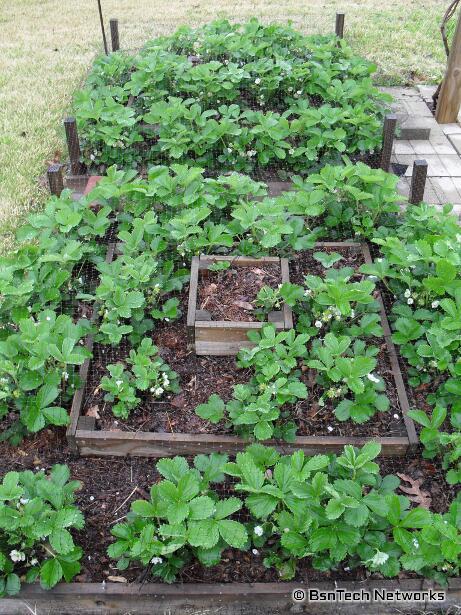 So far it has been an exceptionally good year for cool-weather crops.  Unfortunately that means it has set my planting of corn back.  I already had the corn in the ground by this time last year.  I had planned to put green beans in place of the corn once they were down, but I’m not sure if there will be time to do that now.  That is why.. they may end up in the flower bed!

2 thoughts on “Rainy April is Gone – Now Where are the May Flowers?”