This year was the first time I've ever purchased seeds through an online company.  Well, I guess I did buy some Sugar Dots corn seed last year through a place – but this time I bought all the seeds I need for the garden except for potatoes.

Over at the GardenWeb Vegetable forum, folks were mentioning a place called FedCo Seeds.  I was quite surprised when I went to the FedCo seeds website to see their prices!  All other seed catalogs are very high on their prices – and shipping makes it not worth buying them at all.

Previously, I've always purchased my seeds from local garden/farm stores.  They already have their seeds out in the stores as well!  They carry the Burpee variety of seeds so while I was there a few days ago, I gave their displays a good looking over.  They typically sell their seeds 30% off of what Burpee's retail price is – so that is nice.  However, I feel very confident now on my decision to purchase from FedCo seeds.

As an example, the Silver Queen corn was available on the Burpee stand, but it was only 3/4 an ounce for $1.50 – even with the 30% off!  Through FedCo seeds, you got TWO ounces of seed (almost triple the amount at the store) for $2.00.  That is quite the difference – and with the two ounces of seed, I should have corn seed for three years now.

Overall, FedCo Seeds had a better selection than the displays at the stores.  While the stores had plenty of varieties of seed to choose from, there were several items that they didn't have.

Most of the order from FedCo Seeds came in – but the peas and bush beans (three packages total)  are on backorder and will be shipped later.

So, I got 13 packages of seeds for $22.90 including shipping from FedCo.  Here is what was ordered: 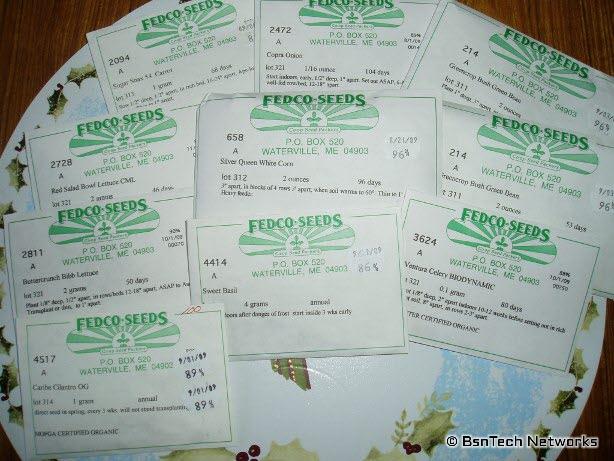 So that is quite a bit of seed for the money.  While I would have liked to see them carry the Fortex Pole Bean, the Kentucky Wonder Pole Bean seems to be a relatively well-accepted one.  The Fortex Pole Beans can grow nine inches or longer – thereby increasing yields per square foot.

This year we are going to venture into trying celery and a few herbs.  One of my friends says his mom grows basil and they eat it fresh in salads and on several other dishes and it is great.  I have six long planters that are about 29 inches long, about six inches deep, and about five inches wide.  I figured we might as well use these for something and plant three with basil and three with cilantro and see how they turn out.

The celery is very hard to grow from what I understand.  I've read that you need to start celery indoors about 12 weeks before your last frost (just right there with the Copra onion).  This starts to get into the question – is it worth growing these items since that is three months of fluorescent lights  with an electric bill?  But, I'm all for experimenting to see what we can grow and testing my green thumb to see if its possible.