We have experienced some very odd weather this year.  However, I will have to say that for the past two years, we have not had any major storms like we typically have.  We live in tornado alley – and therefore typically have the sirens go off a few times a year.  But, the sirens never went off last year – nor this year thus far.

The weather in Illinois is changing – at least the past two years have seen it as well.  A few weeks ago, we actually had temperatures of approximately 97 degrees for a couple of days.  Then a cold front moved through and the temperatures have now subsided to more normal temperatures for the past couple of weeks.

But, we still are lacking rainfall.  Illinois – or at least Central Illinois – has had less than half of the normal rainfall up to this point in the year.  Not good.  However, it is a good thing that I am somewhat prepared and have a 660 gallon rain barrel system behind the garage to store water to keep the garden hydrated.

Moving on.  It has been another three weeks or so from my last post – and things have certainly changed around the garden.  It is getting harder to find time to take pictures, resize them, and then create a blog entry.  Back on April 6th, we had our baby daughter – and she certainly does consume a lot of time.  In addition, I also started a new job and it takes me longer to get to work.  In addition, I was spoiled at the previous job by not having to take a lunch – so I worked a straight eight hours and went home.  With the new job, I do need to work the full schedule – so I get home about an hour and a half later (because of driving time as well).

Starting off – here is some lettuce that was picked back on May 13th.  We have only picked lettuce twice this year.  This past batch took another six 1-gallon ziplock bags to fill.  The harvest was so large that I decided it would be easier and faster to clean it in the bathtub. 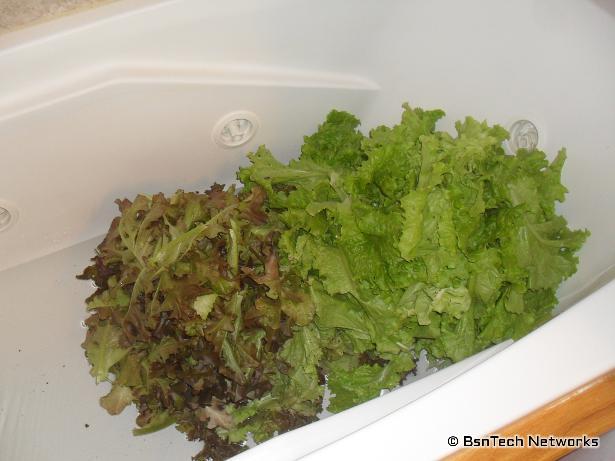 Now, the lettuce needs picked again – and I’ve just not done it.  We gave two bags of lettuce to our neighbor – and it is now three weeks later and we still have a bag of lettuce in the fridge.  Amazingly enough, it is holding well over the three weeks – but it is to the point where it almost needs tossed out now.  The lettuce has begun to bolt – but there is a lot out to pick.  I probably need to get out and pick it all tomorrow (Saturday). 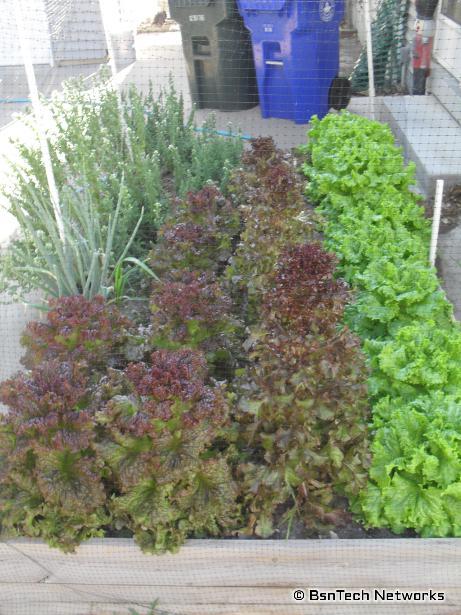 Over by the carrot area, the Sugarsnax carrots are doing well.  I don’t know how many died off due to the weather, but it does look like it is a full load for the year. 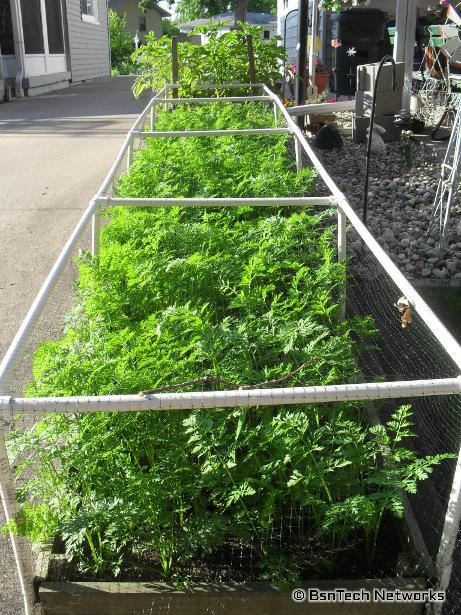 Due to lack of time this year (well, and the fact that some things we just didn’t eat), I didn’t put out any watermelon or cucumbers this year.  Last year, we certainly had a good amount of watermelon – but we didn’t eat it very often.  It was full of seeds – and when you have to constantly pick seeds out of watermelon, it makes you not interested in eating it.  I did choose a seedy variety though because it was not a hybrid.  I might try a seedless hybrid at some point – but that does mean continuing to purchase seeds each time we need to plant.

The cucumbers – well, I kind of forgot about them.  I’ve always put out about five or six plants – and end up with more cucumbers than we can eat.  So, in place of the watermelon patch this year, I planted some green beans – because there isn’t a lot of space to plant green beans this year. 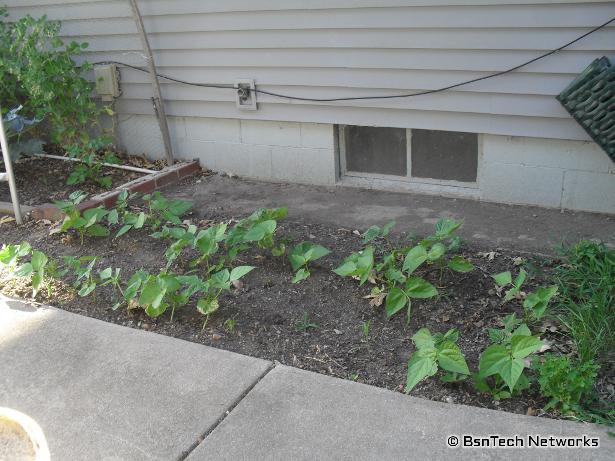 Behind the green beans, I sowed a row of sweet basil – because again, I forgot to put it out.  Only three plants came up.  Better than nothing I suppose.

Over at the side garden, the Cascadia Snap Peas are doing OK and the broccoli is doing well.  We have already picked two helpings of peas.  The weather really has zapped the peas since it has been so hot – but it does look like there are a few blooms just starting to come on again.  Maybe we can get one more picking of peas – because only about three pounds have been picked this year (compared to about 12+ pounds last year). 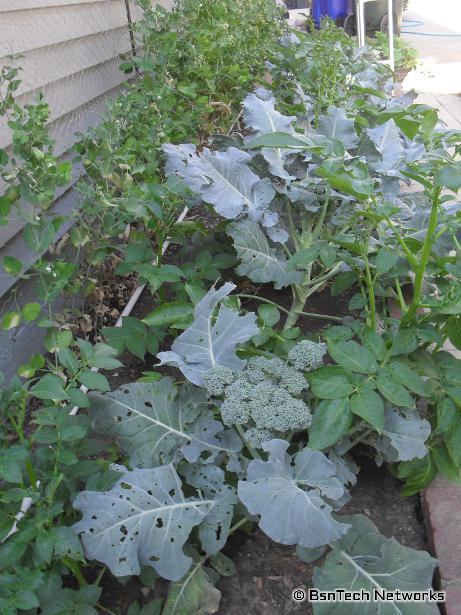 The back garden is also doing good with the Kennebec potatoes.  Unfortunately this year, I don’t have any leaves to mulch the potatoes – so I just hope that the potatoes stay under the ground. 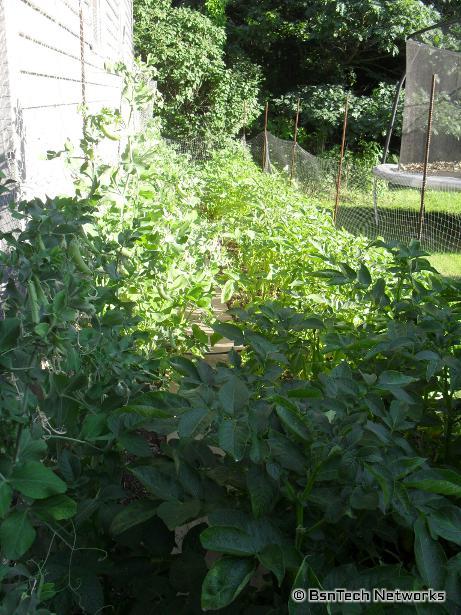 Moving to the front garden, the Copra onions and Ventura celery are doing well.  I do need to potentially cut one or two stalks of celery to start that process – since there is about 12 of them planted. 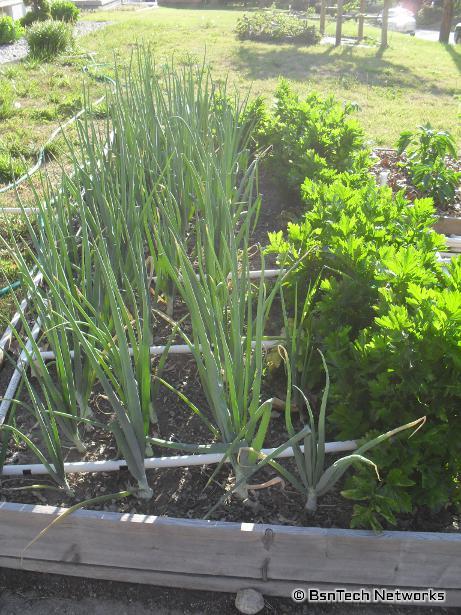 The onions down by the road in the flower bed are also doing well – maybe even better than those in the front raised bed. 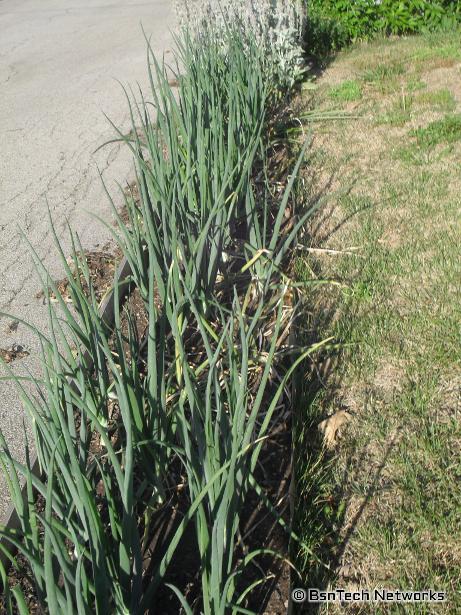 In addition, the four Snow Crown Cauliflower in the flower bed are doing well too.  They all have a small cauliflower curd growing. 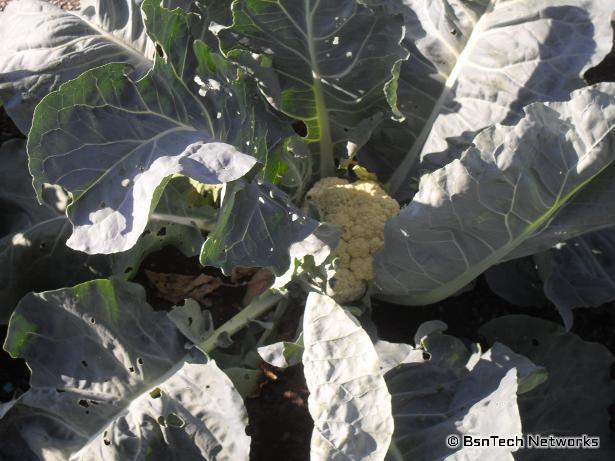 Back to the main front garden, here is a total view of it.  You can see the tomatoes and California Wonder peppers over on the left and the Honey Treat corn growing on the right. 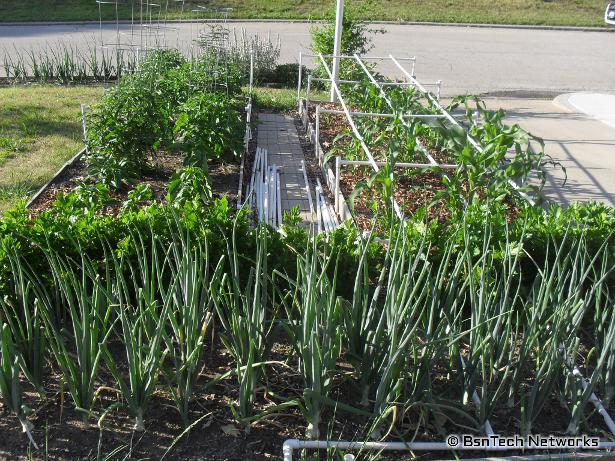 I have had a hard time with the corn this year.  I ensured that it was planted after the ground temperatures warmed up – because sometimes I have planted it a bit early with poor germination.  So, this year I waited a bit longer to plant it – thinking I would get better germination.  Anything short of that!  The first round, there was about 100 Honey Treat corn planted.  Only about 20 came up.  A second round of around 75 was planted.  Only around 10 came up.  Then I planted yet another round of 60 or so.  Only four or five came up.

I was getting a bit ticked – so I pulled out the germination containers that I use to start plants in.  I planted another 144 last weekend and they are in the house.  So far, about five have come up – still far short of what I need.  The front garden can support about 75 stalks of corn – spaced 8 inches apart in the row – and the rows spaced about 18 inches apart.

And lastly, I decided to take a picture of the grape arbor and the strawberry pyramids.  The strawberries completely need torn out – and a new variety tried.  The Tri-Star strawberries did great the first year – then production was lost by about 50% – and this year, negligible.  Maybe 8 ounces total for the year.  We haven’t been very happy with the small size of the Tri-Star strawberries either – and certainly want to try something else that has a larger berry size.

Well, that takes care of the garden update for this week.  Hopefull I’ll post again before the end of the month!