Starting last Friday, I began taking the onions outside to get some fresh air and some sunlight!  I kept them out from about 7:30 am until about noon – when the wife brought them back in.  This is the idea of "hardening off" – slowly acclimating seedlings to outside conditions because of them growing inside with artificial fluorescent lighting and no breeze.

Saturday I took all of the seedlings outsidte – onions, peppers, tomatoes, broccoli, lettuce, and celery.  I actually left them out all day because the temperature was a little cooler outside than what it was in the house, and it was cloudy most of the day.

Saturday evening they were all brought back in – except for the onions.  It is about time to plant onions – although there still is a chance of frost.

Sunday they were all brought back outside again.  Sunday was about 65 degrees and mostly cloudy; the sun did peek through several times to get some direct sun to the seedlings.  Again, all the seedlings were brought back inside that night.

Monday they again were all put back outside – but tonight they will all remain outside.

However, over the winter, I read up more about peas because I would like to have plumper peas.  So I discovered that if you plant sugar snap peas, you can wait to let the peas plumpen a bit – and still eat the pod!  So I got some Burpee Super Sugar Snap peas and planted about 99 of those today.

One thing I noticed this year is that the Super Sugar Snap peas were only 0.75 ounces for the package at $1.99.  Last year, when I purchased the Dwarf Gray Sugar peas, the packet was 1 ounce and $1.79.   So, clearly from this, you can see that the cost of seeds are going up – not only do you get 25% less seeds, you also are paying more for them.

Sunday afternoon I planted about 25 onions in the new retaining wall behind the garage made out of foundation blocks.  Foundation blocks have two squares cut out of them – what a perfect place for onions!  Monday after getting home from work, I then planted the rest of them to fill the squares all up.  I still have about half of the onions to plant – and they will be planted in the front garden.  It was already dark when I took the below picture, but you can get an idea of how they are planted. 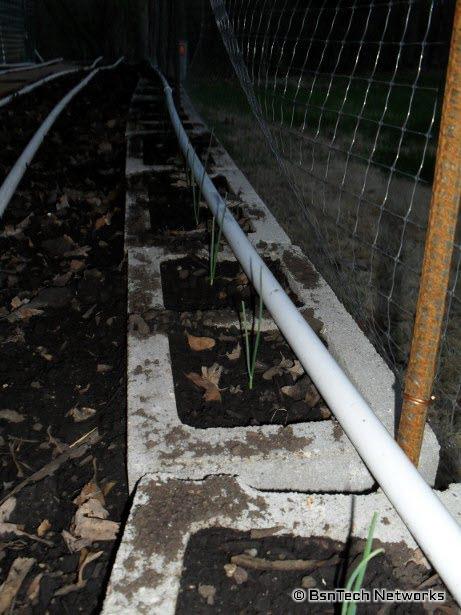 The weather lately has been unseasonably warm – the weather man last night said that the temperatures are five to eight degrees warmer than normal.  This is why I haven't put anything else in the ground except for the onions – it is possible we can still get a freeze.  The average last frost date is April 27th – which is still 22 days away!  Probably in about two weeks I will plant the broccoli outside.

Moving on, here are all of the seedlings outside. 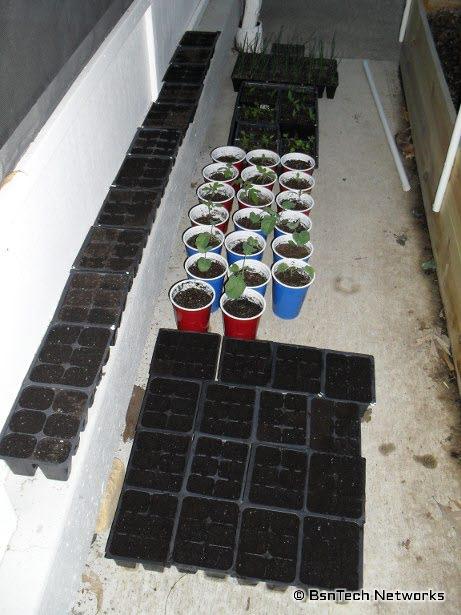 The Dwarf Gray Sugar peas are up on the ledge and the Super Sugar Snap peas are in the front.  These were just seeded tonight – so nothing coming out of them yet!  I just hope they will transplant well from these six-packs. 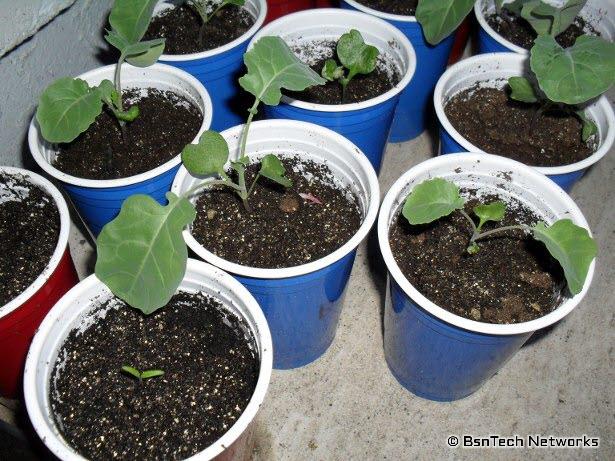 Above are the Green Goliath Broccoli seedlings – I have eight total.  They are doing quite well for only being two weeks old. 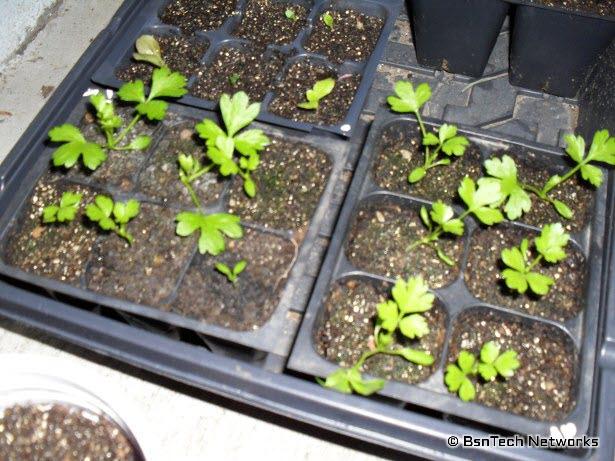 Above are the Ventura celery seedlings.  I lost another one this week due to damping off disease – so I only have 16 left – which is exactly what I need to plant outside.  I can't afford to lose anymore of these!  I think the breeze is doing these some good because the stems are still very fragile and need toughened up a bit. 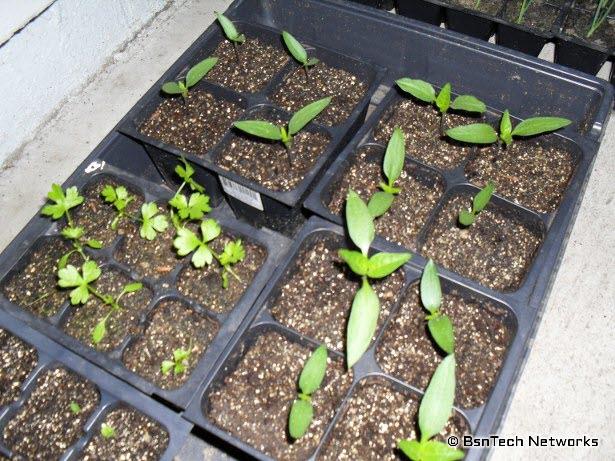 Here are the California Wonder peppers – and they are doing quite well.  As odd as it seems, the peppers in the bottom part of the picture are those that I saved from the pepper plants last year.  The other two four-packs are seed that is two years old from Burpee.  It seems that the seed I saved is doing better and growing faster than the Burpee seed! 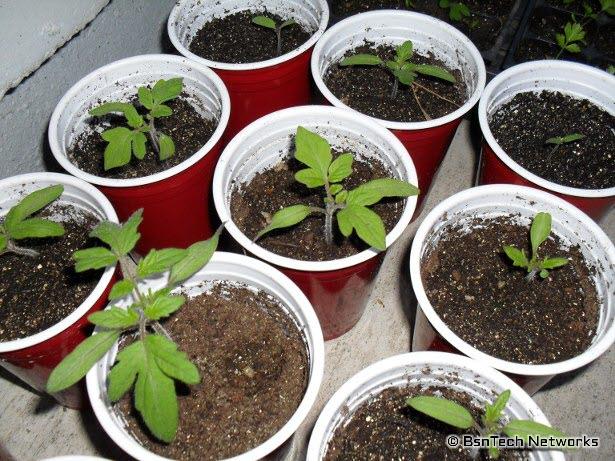 Well that is all for the seedlings.  Moving on to the next project – putting pavers down between the house and the garage.  There is about a three-foot wide area between the garden bed and the landscaping and when it would rain, it turned the area into a muddy mess.  Since Menards had those pavers on sale through Saturday, I purchased the rest of the pavers I needed Saturday.  It took a total of 50 pavers to finish the project – but not bad for about $40 for the project (including the sand too!).  it isn't perfect and the pavers do have varying heights, but it definitely is a lot better than what it was before! 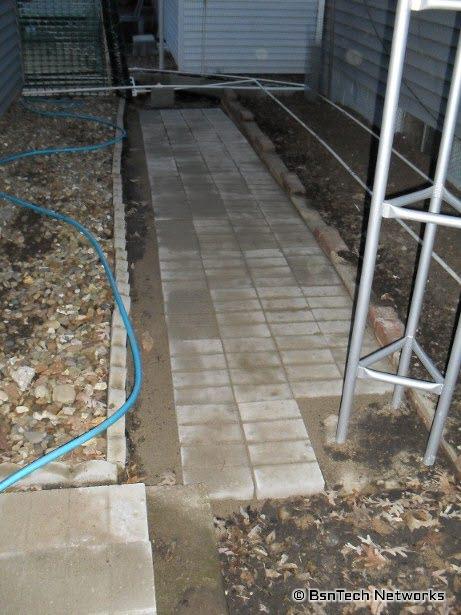 I still need to put some sand in-between some of the pavers so I'm not done yet.  I also have to move the scalloped edgers that hold the rock back to be up against the pavers since there is about four inches of space left on that side.