The signs of Spring are definitely here this week.  However, we did dip below freezing Thursday night and had a little frost.  I had to bring all of the little seedlings in overnight.

All of the onions have now been planted outside.  They are frost-resistant and they did fine outside.  Today I planted the Green Goliath broccoli into the front garden – spaced 18 inches apart. 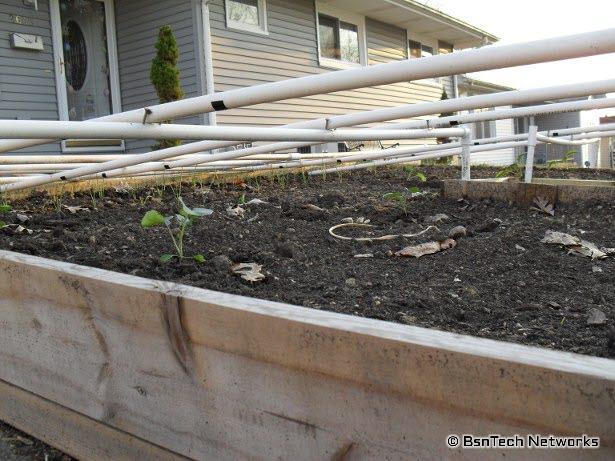 I've had six more tomato plants sprout in the past couple of days!  Two of them were Roma tomatoes, three were Best Boy tomatoes, and the other one was a Red Cherry Tomato.  So those were moved into their own 16-ounce cup as well.  I now have a total of 18 tomato plants – and I only need six!  The wife mentioned that she really liked the flavor of the canned tomatoes – so I am thinking of maybe planting eight or nine tomatoes instead of six.  Right now the plan is to plant four Best Boy tomatoes and one each of Roma and Red Cherry.  I found that the Best Boy tomatoes seem to be just as meaty as the Roma tomatoes – which is preferable for the salsas and canning that we do.

The neighbor mentioned he saw a squirrel plaing in the little patch I have the seedlings – so I just walked from taking pictures and putting the netting to keep the critters out. 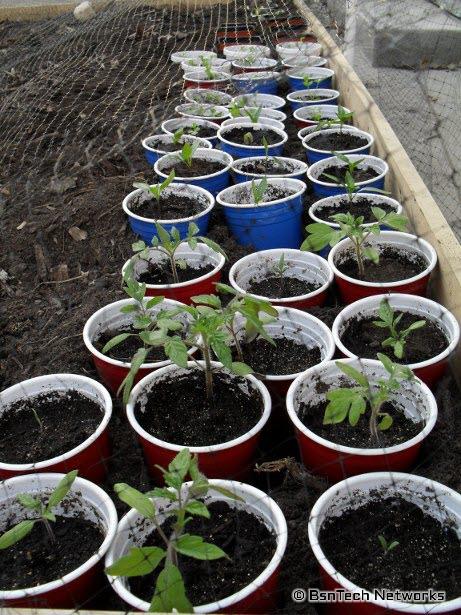 The carrots were planted out on Wednesday.  I've had the clear plastic cover over the area for a week or more now.  Last year I didn't plant the carrots until around April 15th.  So I am a week early in planting them this year.  I just couldn't help myself with how warm and nice it has been lately!

I planted 189 Burpee A#1 carrots.  This seed is a year old, so this will be a good check to see how well carrot seed can stay good in a freezer.  I then planted new seed from FedCo seeds – the Sugarsnax.  I planted 231 of those.  Folks over at the GardenWeb forums recommended Sugarsnax or Scarlet Nantes – so I am trying Sugarsnax this year.  Planting carrot seed is very tedious and took a very long time to do. 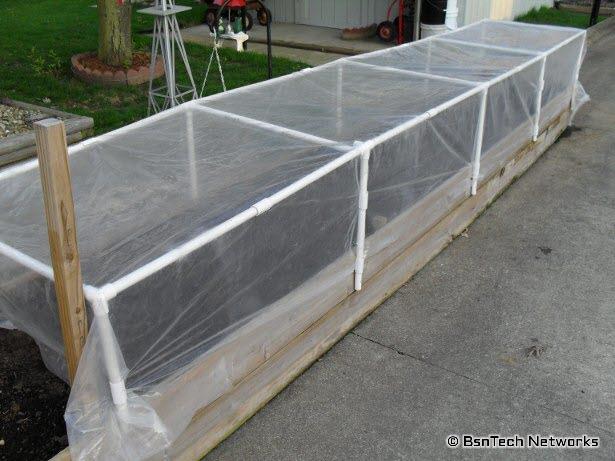 The grape vines are growing as well.  The buds have pushed out and are beginning to show some leaves.  The first picture below is from the Concord Seedless grape vine and the one below that is from the Flame Bunch grape vine. 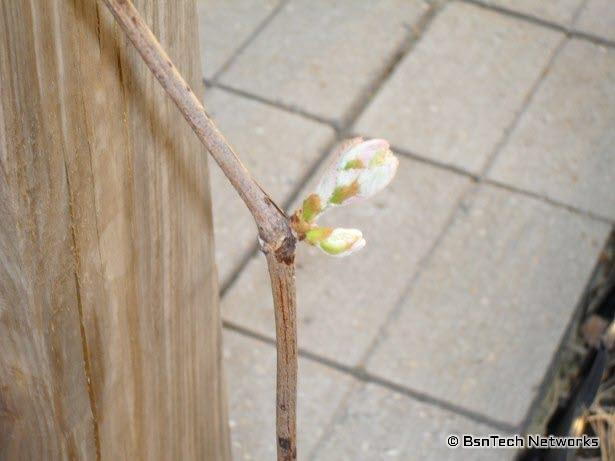 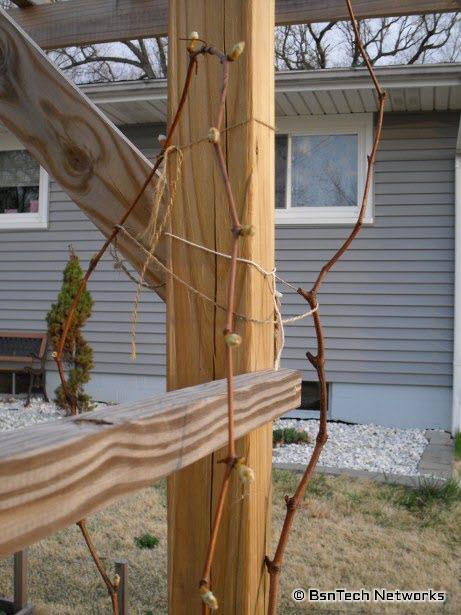 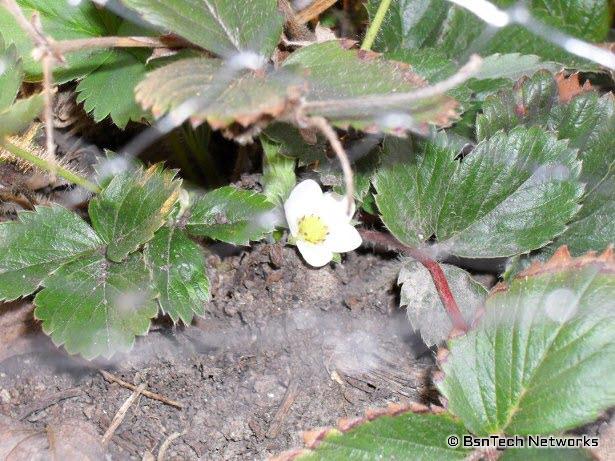 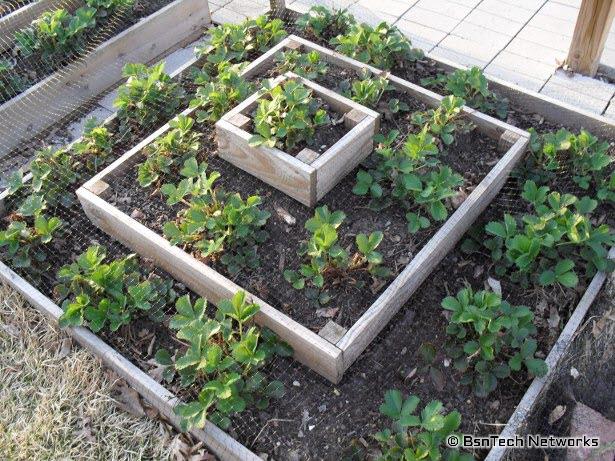 The Granny Smith apple tree has made a come back as well.  The deer really ate into the tree last year – biting off all of the ends and all of the leaves as they grew.  This year I have put some deer netting around the tree – which is held up by some rebar stakes.  I hope this keeps them away.  But, the tree is flowering.  It has very nice flowers during after they open up. 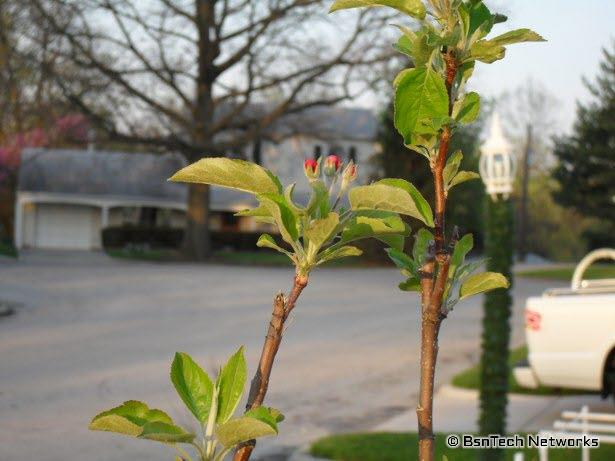 Now for an update on the landscaping project between the house and garage.  It is finally done!  All of the patio blocks are down.  I then had to move the scalloped edgers on the left side to be right next to the blocks.  There was about a five-to-six inch area between the edgers and the patio blocks.  Sand has been put between all of them and after a few rain storms, the sand has packed in and they are snug and not moving now.  This is a huge upgrade from what it used to look like.  This was nothing but a mud bath after a good heavy storm. 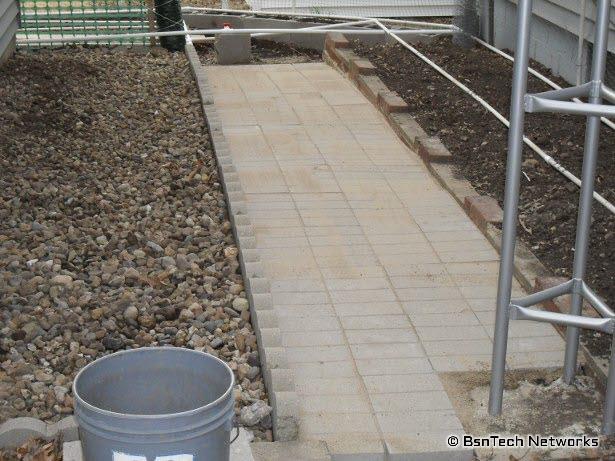