After talking with some folks at GardenWeb on my post, I opted to go to Lowe's and buy a soil test kit and a pH/moisture/light meter just for some piece of mind.  While someone told me to quit worrying about it and just plant, I couldn't let it pass my mind because of all of the work and expense going into the garden this year.  I want it to be productive right from the start – not a year later after amending the soil.  You know what they say – garbage in, garbage out.

Anyways, I first started with the pH meter.  In the instructions, it says to put the probes about 5 inches down into the soil you want to test – but the soil needs to be muddy.  So, I brought in a cup full of soil and filled it until it was nice and muddy with tap water.  Well wel – the pH meter just barely moved off of the default 8 the needle points at, and went to maybe 7.8 or 7.9.  Not happy let me tell you!  People on the board said that the stuff should be around 7.0 – and most veggies need between 6.5 and 7.0 to grow well.  So I have stuff that is basically about 9 times more alkaline!

A bit upset, I then went back outside and got a cup full of soil from where I grew the tomatoes last year, and a cup from where I grew the corn.  I had them separate and made them into a muddy mush – put the meter in – and about the same thing!  It shows around 7.5 – 7.6 for them!  Now, corn can grow in a pH of 5.5 to 7.0 and tomatoes in a pH of 5.5 to 7.0 also.  So how on earth did these grow as well as they did last year?  Is this tester broke or are the pH scales for the veggies over/under stated in some way?

So, I got out another cup and put a few tablespoons of lemon juice in it and then filled it to the top with tap water again.  Well, the pH scale sure moved this time!  It showed a pH of about 3.5.  So the pH meter did move and showed that lemon juice was more acidic.

I then got out the soil test kit which tests for nutrients like nitrogen, potassium, and phosphorous that plants need to grow – and it also has a pH test as well.  After reading the instructions well, I followed the procedures for the pH to check it one more time.  After a few minutes, I checked it and the color was a medium green hue.  Holding up to the pH chart provided showed that it was showing about 8.0 again.  OK, I give up – so apparently the soil in this area – even the manure/compost mix is more alkaline.

The nutrient tests were then done and showed medium nutrients in each of the three tests – so those checked out fine.

Since it still is a bit too early to start planting, I figured I would get some of the manure mix today and sift it through a fine screen to see if the seeds or plants will even sprout.  I planted three of each variety that will be in this soil type – carrots, broccoli, radishes, lettuce, peppers, cauliflower, and green beans.

Afterwards, I knew that I needed to make a stand for the 4-foot fluorescent light to hang from to put over the seedlings.  So I got out some scrap wood and made the litle hanging thing which wasn't too much work at all. 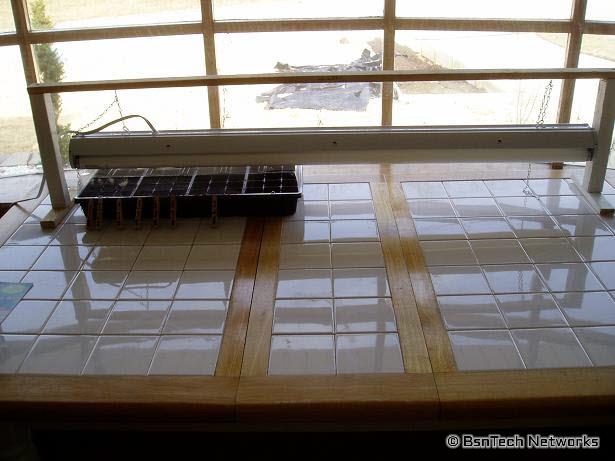 I was also reading online how to preserve seeds / how to preserve vegetable seeds.  In the Square Foot Gardening book by Mel Bartholomew, it mentions to put the seeds in a container and then place them in your refridgerator because seeds need dry conditions and cold conditions to keep the seeds in good shape.  So, although a small investment of $10 was purchased on seeds this year, there are plenty of seeds that will be left of carrot, broccoli, radishes, lettuce, pepper, tomato, and cauliflower for the next five years!  I will have to get more green bean, pea, and corn seeds each year though since they are larger and you don't get nearly as many of those as you do the other seeds.