This evening I just seeded in the Copra Onion seeds.  I was pleasantly surprised at how many seeds are in a 1/16 ounce packet.  I must have at least another 200 seeds left after planting 144 total tonight.

The order of Copra Onion seeds came from FedCo seeds.  I got the idea of planting Copra Onion by the Gardenweb Veggie Garden forum where folks said this is one of the longest lasting onions available for the north (long-day variety) 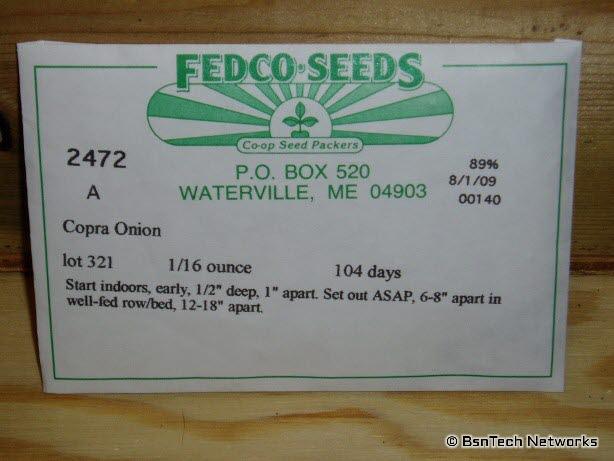 Above is the packet the seeds came in.  It had some decent directions on them – along with a germination rate of 89%.  So the Copra Onions mature and are ready for harvest in 104 days.

While the packet says to plant them 1/2-inch deep, I sort of believe this is a little too deep.  I've read that 1/4-inch deep is enough for Copra Onions.

Alright, so getting started planting the seeds. 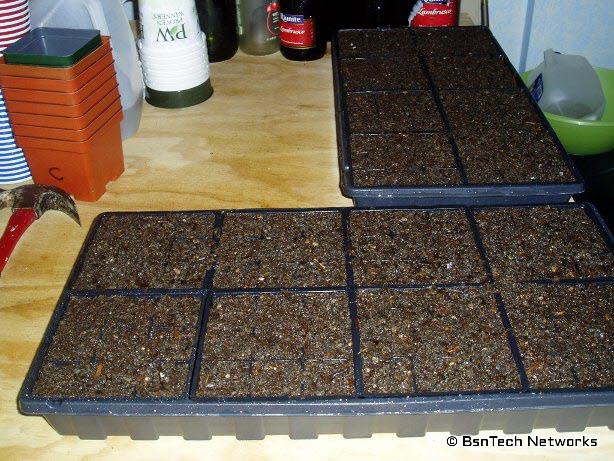 These are the planters I used for the onion seed.  There are eight square containers in each of the trays – and each square container has nine separate seed locations.  I planted two trays – so 144 total.  I only need about 100 onions as this is all I have room for – but the others (if they grow) I can give away to my neighbor or others as well.  I wanted to plant enough to ensure I got good enough seed germination.

Previously when I've planted onions, I've had horrendous luck at getting them to sprout.  So, its time to try my luck again with planting from seed.  It is said that by planting onions from seed, you get much larger bulbs than if you use sets (which is what was used last year).

I put one seed in each of the seed locations and put them down between 1/4 and 1/2-inch deep.  I then used a very fine mister to make everything moist.  Throughout the winter, I've been collecting snow and some rain water to use for the seedlings.  Rain water is much better for plants than tap water – because it doesn't have all of the chemicals in it – and well, its just natural! 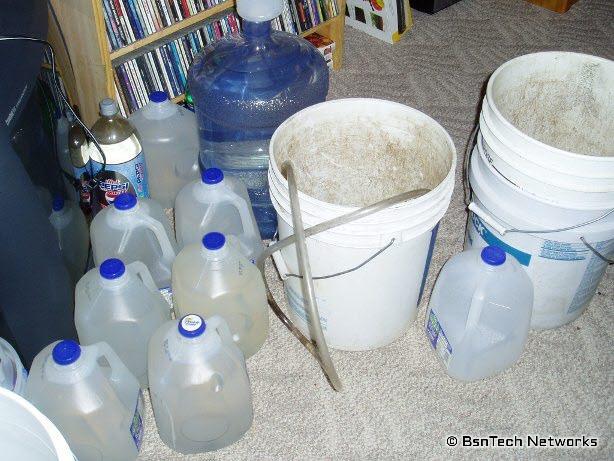 I have quite the bounty of rain water – a large five-gallon water jug along with many one-gallon milk jugs.

Then lastly, it was time to put the clear plastic covers over the top to further aid in moisture retention. 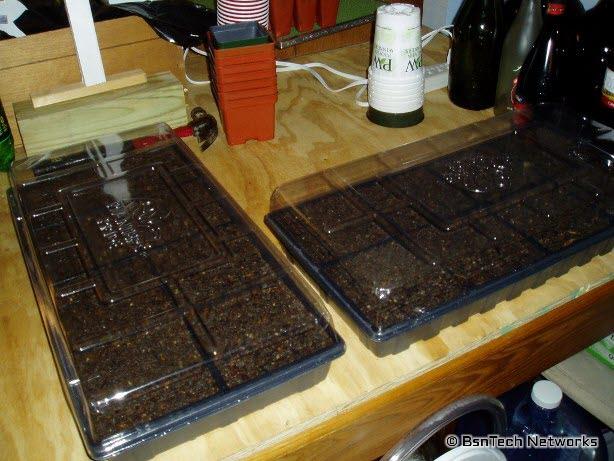 Well, that is all for now.  Next on the list will be planting the Ventura Celery!

It has been nine days since planting the Copra Onions.  At first, I was getting worried that none of them were going to sprout!  The folks over at GardenWeb were showing that their Copra Onions were sprouting in about 4 – 6 days.  At the time I was reading that, it was already a week since I had planted mine!

Well alas, I finally have some sprouts.  The other day I moved all of the 9-packs with sprouts into one of the trays and took the clear cover off of that tray.  I kept the clear cover over the tray that didn't have any sprouts to maintain moisture.

Nine days later, I now have 39 total onions that have come up out of 144 planted (27% germination so far).  It would be 40, but there was a small white worm-looking thing sitting on the soil a few days ago and I didn't do anything with it.  Turns out, it was the very first onion that had sprouted as I took a look and found the seed at the end.  Oh well.

The planting area has a temperature that ranges from about 57.5 degrees at night to around 62 degrees during the day.   There also is rumors that onion seed needs light in order to germinate.  While I cannot say either way, it does seem that since I have turned the lights on, the germinations have been on an upswing!  But, it also has been nine days as well and it may just be time for them to start sprouting. 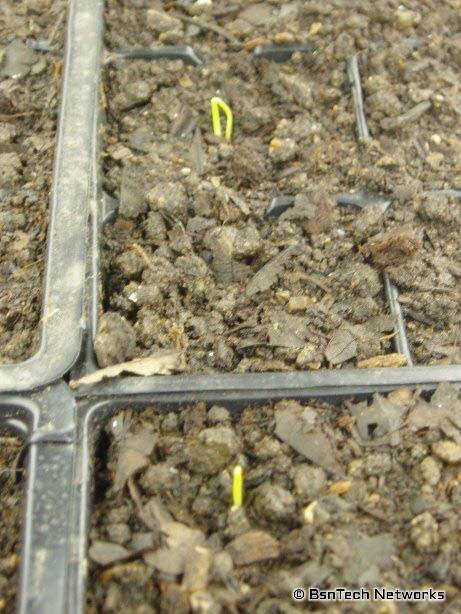 I don't have pictures right now for today, but I'm very impressed with the amount of germination over the weekend!  Just two days ago, I repoted there were only about 40 onions that came up.  Now, as of tonight, there are 108 that have sprouted out of 144.  That is exactly 75% germination.  Getting fairly close to the 89% rate the package said from it's August trial.  I don't suspect there will be many more that will germinate because there were only two that came up today.

Lastly, believe it or not, the past post about seeing the very first seed germinate that looked like a worm has turned out to live!  I pushed the seed back down into the soil and left the white sprout sticking up – and today it is starting to turn green.

It now apperas the seeds are done germinating.  Out of 144, 110 seeds germinated.  I was looking for about 100 onions total and I got a few extras – so that works out well in case some don't make it over the next 10 weeks before they are planted outside.

In a matter of four to five days, they have grown fairly well.

I gave all of the contains another good misting of water this evening. 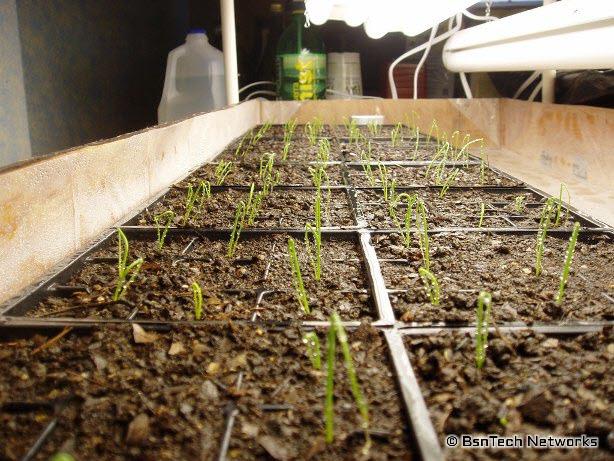 The onions have really grown in a week's period of time.  Today I had to actually trim the Copra Onions to about 2.5 – 3 inches in length.  It is said that this is good to do for the onions so that it allows them to make good, strong roots and put up additional leaves instead of just one.  This is why you will see in the photo below a lot of greenery lying on the soil surface – because those were the clippings.

Unfortunately, I have lost about eight onions due to "damping off" diease.  This is a downfall of using soil from the garden for seed-starting, but it hasn't spread to neighboring squares. 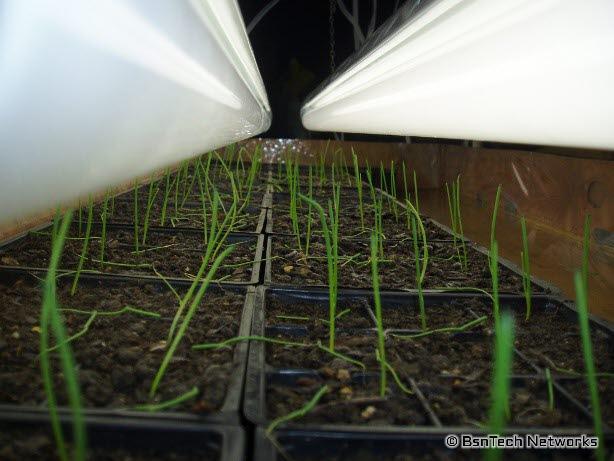