Well, welcome to the 2012 gardening season!  This is the first post of the season – and it is about the germination station and getting some seeds started.

I am starting a bit earlier this year with the celery and onions.  Last season, I did a test planting of some Ventura celery and Copra onions back around December 20th.  I did also start some celery at the beginning of the year – but the Copra onions were started around January 20th.

Here is the germination station setup so far this year – with two lights on over the onions: 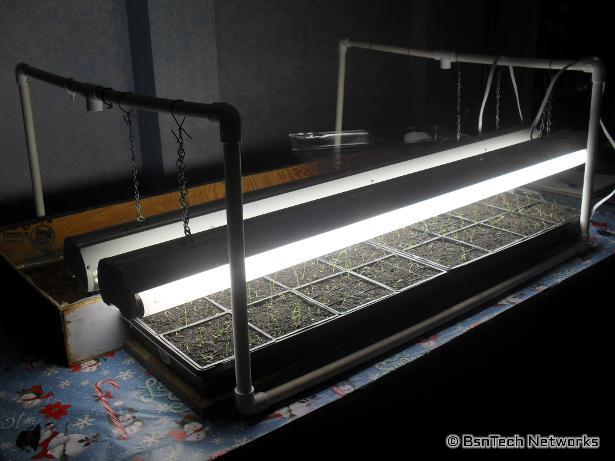 This year, I started the Copra Onions on January 1st and Ventura celery a day later – as I let it soak in some water overnight.

I planted two Copra onion seeds per each black plastic cell.  Last year, I just filled a large tray with soil and planted the onions – but when it was time to plant them in the garden, their roots were all tangled up and they were hard to pull apart.  So I went back to planting them in black plastic containers that have nine cells in them – so I can fit a total of 72 cells in a tray.

Two total trays were planted with two seeds each – for a total of 288 Copra onions.  In years past, I also lightly placed some soil over the top of the onion seeds – but this year I simply placed the seeds on the top of the soil.

That was a bad idea.  So far, about 221 of those seeds have germinated – not too bad!  However, as you can see by the below pictures, onions should ALWAYS be planted and NEVER placed on the top of the soil: 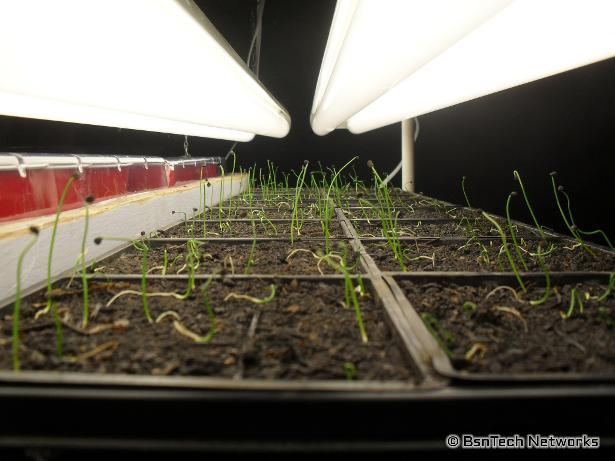 Yes, the onions are reaching up – but not all of them.  You can see how some of them are going nowhere.  Really sad – but I’ve also seen many of them that have already detached from the soil and will die soon.  Some others have had their roots withered up and are not gonig to make it either.  Here is a closer view: 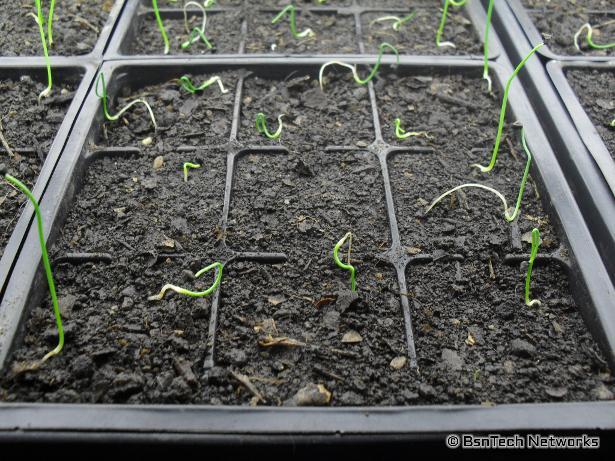 So, take it from me and my trial and error – DO NOT put onion seeds right on the top of the soil.  They need to be covere with a very thin layer of soil to do well.  I’m just really hoping for the best – and hope that I can get at least 100 – 150 viable onion plants out of 221 that have sprouted.

Next on the agenda are the Ventura celery seedlings.  They were planted on the 4th of January.  I was getting quite worried – because up until yesterday, I did not see one of them sprout.  As from my research last year, you get MUCH better celery germination results if you follow these two tips:

It has been said that celery seed needs light to germinate.  I’ve read this on many forums and I have to say – this is the TRUTH.  When I put the celery seed under a layer of soil, the germination results were terrible.

So, I just counted the celery germination so far – and a whopping 20 of the 24 have already germinated!  Yes!  That meets my quota!  I am downsizing on celery this year and only planting about ten plants out into the garden.  That will give them more space between plants without being crammed like last year.  Plus, we only harvested about half of the celery last year anyways.  No reason to plant more than we will use – especially since it will take all the nutrients out of the soil.

So, when planting onions and celery – the moral of the story – celery should be placed ON TOP of the soil and needs light to germinate.  Onions should be COVERED with a thin layer of soil so that they have some kind of base for growth.