I am getting an earlier start on the garden this year.  Yes, yes, I know.  You might be asking why I am having a garden after the defeat last year (if you read prior posts).  Well, gardening is my hobby.  Even my wife this morning (while taking the pictures) said she didn’t know why I still do it.

Each year always brings new challenges and new discoveries.  While I know the front garden gets trampled by deer every year, maybe I need to use better fencing.  I’ve used the green four-foot high ‘snow fence’ two years ago.  Last year, I used the seven-foot high ‘deer netting’.  Deer got in each time.  With the deer netting, they couldn’t jump over it (at least I don’t think so), but the netting was so light and thin that it was cut in several places.

Menards has a six-foot high wire fencing that I may try this year.  Really want to get back to having tomatoes and green beans.  In years past, we got several gallon bags of tomatoes and green beans.  Just this past week, I used the last bag of tomatoes, green beans, and finely chopped onions from the garden  (yep, I will eat stuff 2+ years old).  I made a big pot of a vegetable soup with corn, green beans, tomatoes, chopped onions, rice, a package of bacon, and some older mini hot dogs.  Also had some cut-up peppers that were from this past year’s garden.  I’ve been eating on it for a week and still have half a pot left – so it has lasted a long time!  And it is healthy with all of the vegetables in it.

Well, starting off this year earlier than before, I have already planted the onions.  I’ve usually purchased seed from Fedco Seeds through mail order/online.  But this year, the only thing I needed was onion seed.  With their shipping and processing costs, I could not see paying $10+ for one packet of seed (which was about $2.60).  On top of that, they have discontinued the onion I have always planted – Copra Onions.  Copra had some of the best storage life and got fairly large.  I never had too much success with getting the 1+ pound bulbs but they did last a while.

So this year, I purchased two packets of 150+ Walla Walla seed from eBay.  I wasn’t sure how the germination was going to be, so that is why I purchased two packets.  Still a good price at $3 including shipping.  Walla Walla looks to be a very popular variety, although it doesn’t seem to have the storage life that Copra onion does.  Either way, that just means more will be chopped up and put in the freezer for soups.

They were planted last weekend.  Seven days later (today), I have a total of six (of about 150 planted) Walla Walla onions just coming out of the soil. 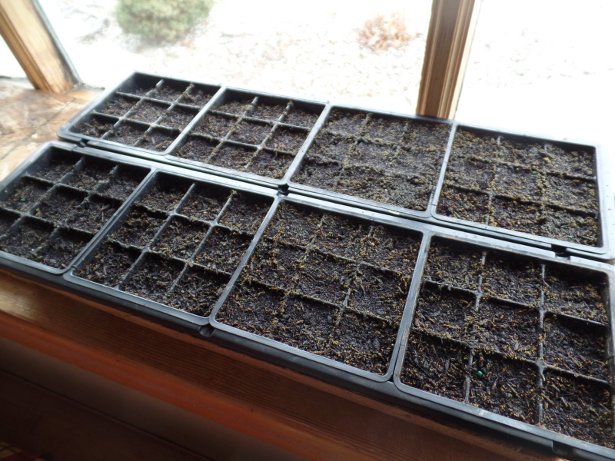 This year instead of using the larger planting containers, I used those that are half as wide.  Same width.  By doing so, I am trying something different – putting them in the window for light.  We have a large bay window, although it is on the north side of the house.  The “Germination Station” uses A LOT of power with all of the fluorescent lights.  Each bulb is 40 watts and two bulbs per light is 80 watts.  Then four light fixtures are used – so that burns 320 watts per hour.  Adds up quick!  Since this year the onion seeds were started three weeks earlier than usual (typically has always been around the first of February), I am going to see how they do in the window.  If it looks like they are not doing well, I’ll have no choice but to get the fluorescent lights set back up. 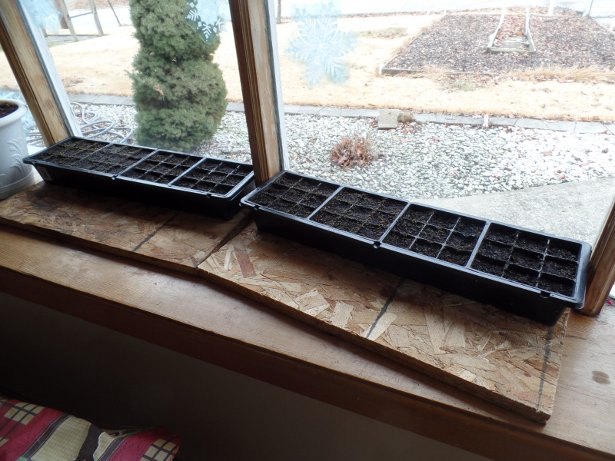 Below is a picture of two of the small Walla Walla seedlings. 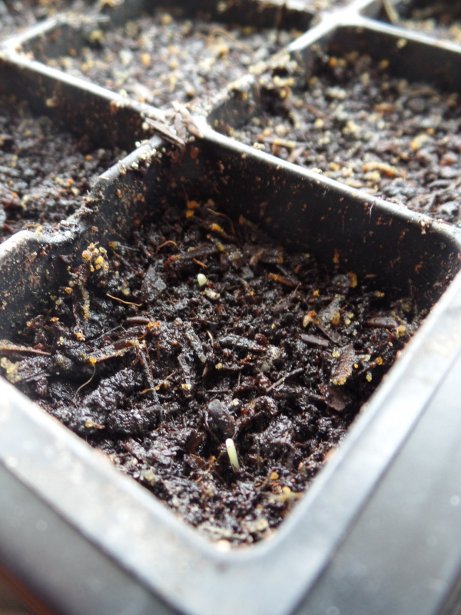 That’s the update for now!