Another struggle of a year in the garden.  Extra high temperatures caused the lettuce to bolt quicker this year.  No more lettuce – unless I get a fall crop planted.  You can see below that the lettuce is pretty tall and bolting. 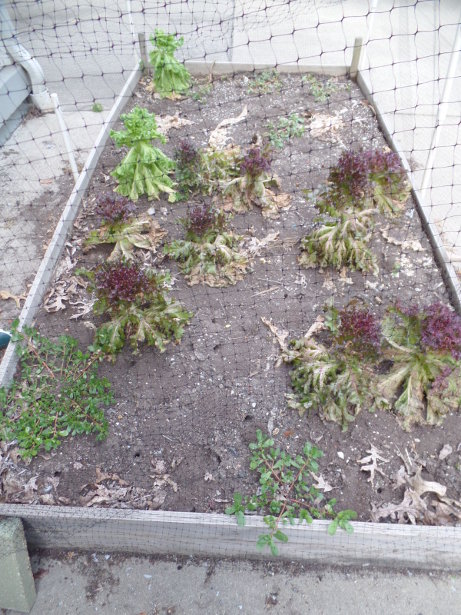 Why haven’t I pulled it yet?  Well, you can see in the picture above – there are many little holes in the raised bed.  We have a bad outbreak of wasps of some type.  They are pretty long and have yellow-looking wings.  Looking online, the closest match I’ve seen is the Great Golden Digger Wasp.  So, afraid of being stung dozens of times by all these insects, I’ve left the lettuce in for now.

I did pull out all of the peas from the side garden – so it is clean now.  But, there are also a few holes in this area too, so the wasps are making homes here.  They first showed up last year – and now seem like they are really taking over.  It is time to do something about it, but what? 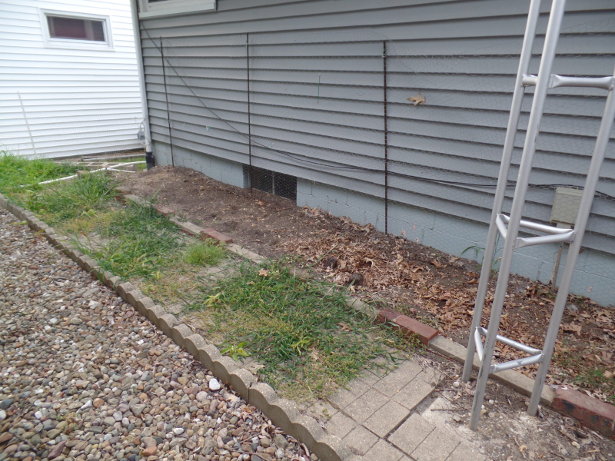 The back garden is a total loss.  Not only is it weed-infested, the wildlife have damaged all of the tomato plants.  They put their necks over the fence and just keep eating away.  At least I think it is deer, but we do have some other creatures roaming around too. 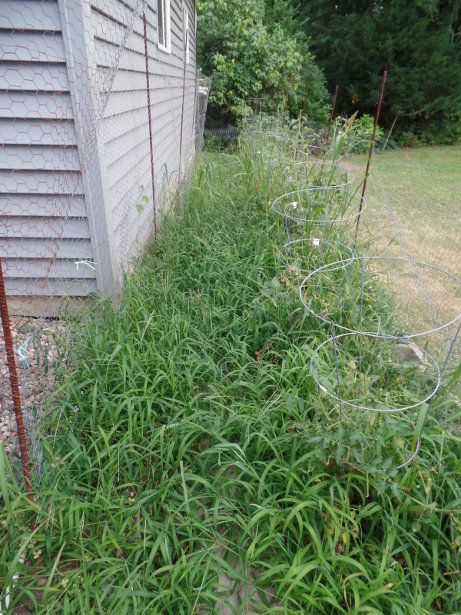 The back garden just needs to be fully taken down.  I really enjoyed it when we were able to get peas to grow back here – and some cucumbers.  It was also used in the past for potatoes (last year I think) and a few others.

In the driveway, the onions are continuing.  They have been bulbing out for a couple of weeks now.  Still, they are not even half the size I am hoping for.  I can’t recall, but the onions usually are done bulbing in mid-July.  Maybe that will give them enough time. 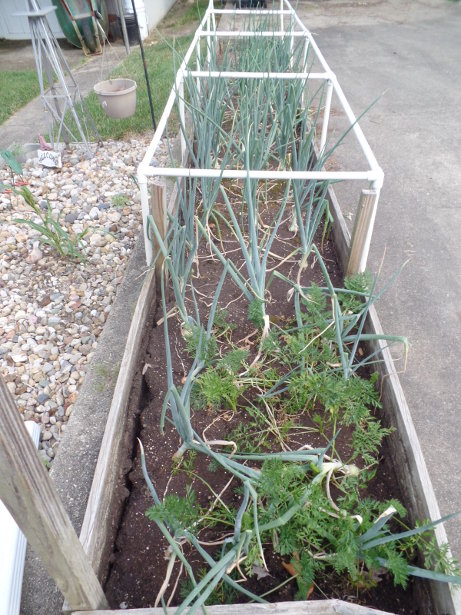 And a closer look of one of the onions: 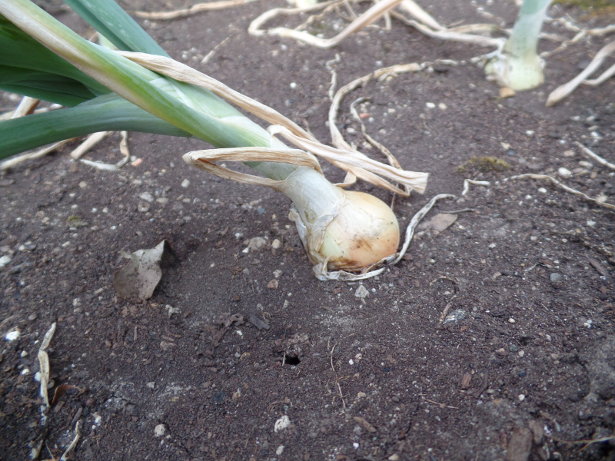 Moving to the front yard, a quick detour to the Rose of Sharon tree between the driveway, yard, and sidewalk to the front door.  It bloomed earlier than usual this year: 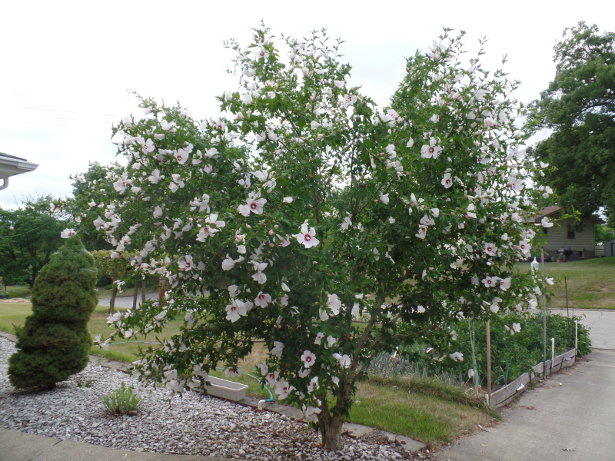 And now for the front garden.  It does seem things are growing well at first sight. 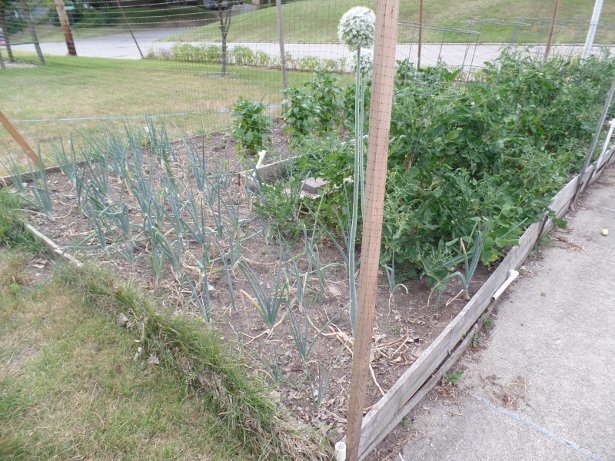 Buuuttt… upon closer inspection of some plants, it is aggravating.  I have had to put a couple more support posts up around the deer netting because something has been knocking some of the supports over.  I still am not completely sure what is getting into the garden, but I still have to think it is deer.  The large prints in the garden – and them being deep – indicate it has to be a fairly large, heavy creature.  I also thought about raccoons (since one has been getting into our dumpster) or a beaver that was caught a few times munching on the peas and lettuce.

Just not sure – but this year, the wildlife have won again.  Last year I used green four-foot plastic snow fence around the garden.  The deer just jumped right over it to eat everything down.  This year, I used 7-foot deer netting.  And somehow, they are still getting in.  There are already several rips in the deer netting.

But as you can see below, the green beans are pretty well eaten up.  We at least had one row of green beans that were mostly untouched, but that changed yesterday when something else got in. 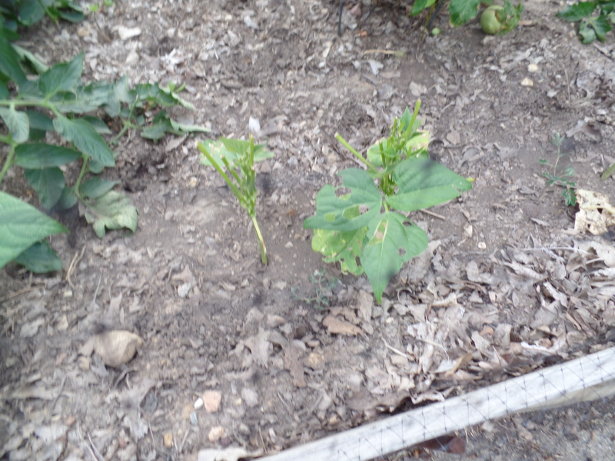 And a tomato plant, although hard to see, it has been getting eaten at the top.  Sure, I guess a raccoon or beaver might be able to stand up on the tomato cage and eat at the top, but I would think the bottoms of the plants would be eaten more.  That is why I still believe it to be deer getting in somehow. 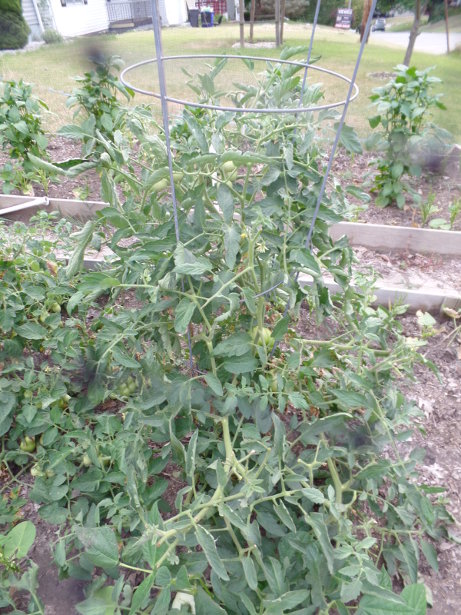 Just as my wife said, she says I should just stop gardening because the wildlife are getting more benefit out of it than us.  I guess we are getting onions and peppers – since the creature isn’t touching those (another sign of it being deer), but that tomato plants last year and the green beans last year were a total loss  At least there are some green tomatoes on the vine this year that will hopefully ripen, but not as many as there would be – if the wildlife wasn’t eating it all.

Speaking of peppers, the pepper plants are robust this year.  With the extended heat we’ve had, they love it.  I already have a couple of peppers turning orange and will be ready to be picked soon. 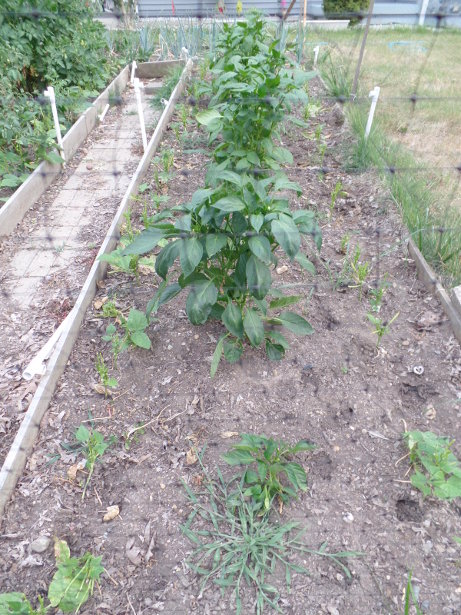 You can see the green beans above too, just very saddening.  See all the big prints in the soil too?

How about the potatoes!  I think the heat has caused some damage to the potatoes.  The stalks seem to be dying back faster than they have in the past.  Some have fully died back.  Just cannot believe that they are ready to be harvested yet, since this is usually done mid-August. 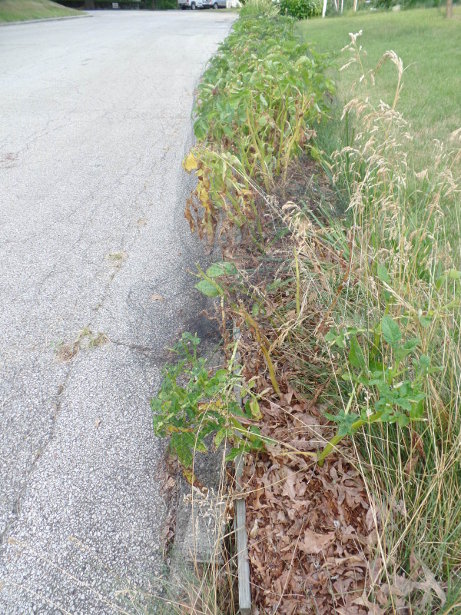 I also had to put deer netting over the potatoes – since something was also eating them too.

And the last stop for this post, the Granny Smith apple tree.  There are a lot of small apples on the tree this year, so it looks like we will get a decent amount of apples for the first time!  We planted the tree – probably five years ago – and the nursery said we would start to get apples within a year or two.  Sure, whatever.  We did get a couple last year – but they were very small and they were picked before being mature.  This year, they are staying on the tree – just as long as it doesn’t weigh it down too much. 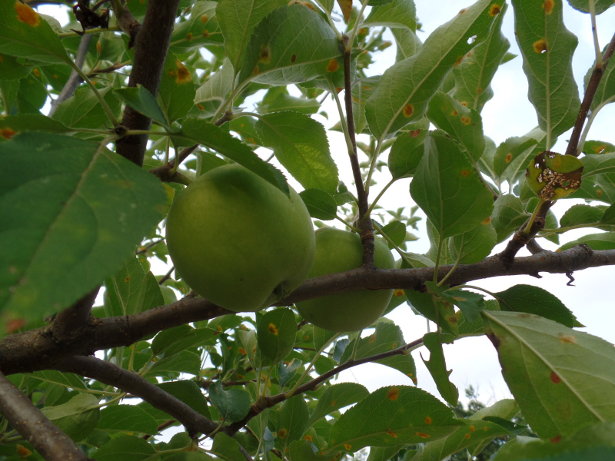 Until next time, we will see what other chaos develops in the garden with the wildlife outsmarting me!