The weather has taken an unexpected rise!  This week the temperatures have been in the 70’s.  Unfortunately now with the time change, it gets dark by 5 pm and I get home less than an hour before that.  So that doesn’t leave much time to do anything.

Monday I got the rain barrels taken out of the loop for the water.  I put the regular downspout back into place so that water is not delivered to the rain barrels.  I also took one of those makeshift power sprayers (just attaches to your regular hose but has a very fine tip so it has a stronger stream of water) and cleaned out the more translucent barrel.  It was filled with algae and had a thick floating layer of algae on the bottom of the barrel where there was still a bit of water.  Not all of the algae came off and there is a substantial amount left on the sides of the barrel – but that is how it goes.

This past weekend and the weekend before I got a huge amount of leaves tilled into the front garden and the garden behind the garage.

Since we have a woods-like area behind the house, we have a huge bounty of leaves that we can use as free fertilizer and this greatly adds in some organic matter into the garden.

The neighbor used his blower and made some large piles of leaves in his yard.  I also raked our yard a few times.  Then I take our leaf blower – which doubles up as a mulcher – and mulched up all of the leaves and placed them in some large trash containers that the neighbor let me use.  He has two of these.

I used one of these containers EACH on each part of the front garden.  After I filled the containers like the one above, I got into them and jumped on them to really compact and make more room.  I bet there was over 50 pounds of leaves in the containers by the time I was done. 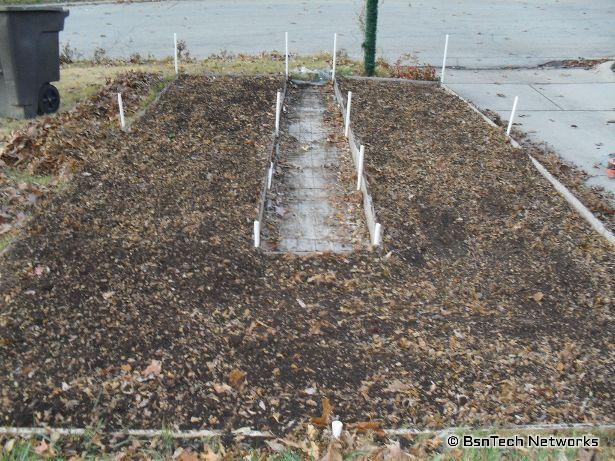 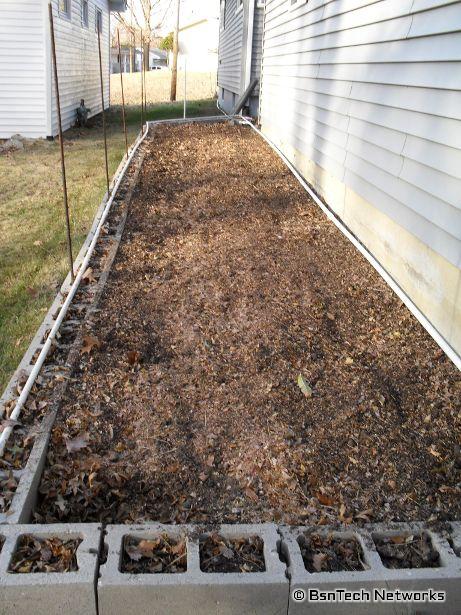 I still need to till leaves into the garden that is next to the house!  Right now I have two 32-gallon containers full of leaves – but that is all!  That probably would be enough to put in that area – but I also need a good amount of leaves to mulch the garden next year (used both 32-gallon containers last year to mulch the front garden).  I also would like to hill up the potatoes next year using leaves instead of hauling in more dirt.  It will also make digging for the potatoes much easier with loose leaves than soil.

So, that is all that is happening around the garden.  Nothing growing – of course!  But I am surprised to see that the lonely carrot and the radish plants are still alive even after several frosts and some hard freezes!

I haven’t had the chance to tally up all of the data for this year’s produce but I will do that sometime before the end of the year.  I did just get all of the peppers cut up this evening from the last big amount.  We have been using them in salads and other dishes over the past two weeks – but the peppers were beginning to get a little soft – so it was time to cut them up and place them in the freezer.  Now we have about six or seven bags of peppers in the freezer.  I guess that takes the place of all the green beans that we had last year – that never produced well this year.

2 thoughts on “Tilling In Mulched Leaves”