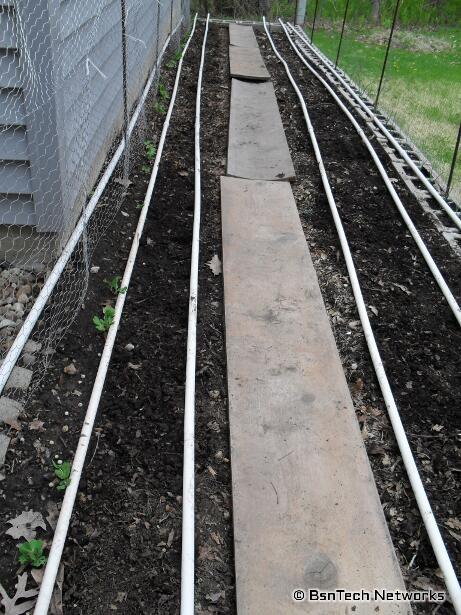 I also got more PVC pipe since I the potatoes were planted ten inches apart this year instead of 12 inches.  That took eight 10-foot PVC sections that had 1/16-inch holes drilled every 10 inches.  Then I also had to get another six 10-foot PVC sections with holes drilled every eight inches for the corn this year.  We’ll see if I have any luck with spacing the corn closer this year – but just highly fertilizing them.

Then, I also decided it was time to get the tomatoes planted outside.  The tomatoes were growing exceptionally fast in the germination station and had outgrown their containers – and I couldn’t move the lights up anymore!  So, they were all planted outside. 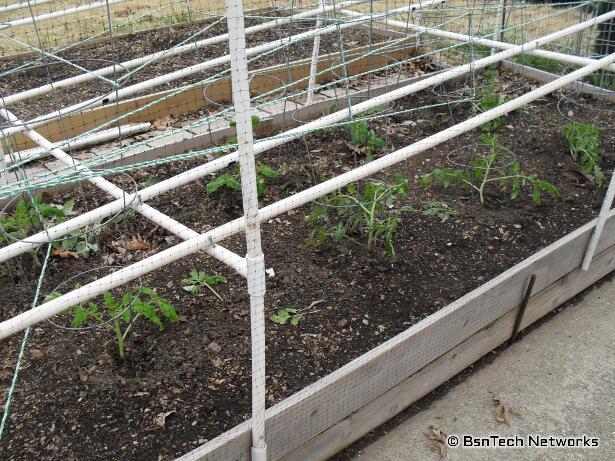 What else?  Oh – I got the two Anaheim Hot Peppers planted in their tote just behind the patio garden. 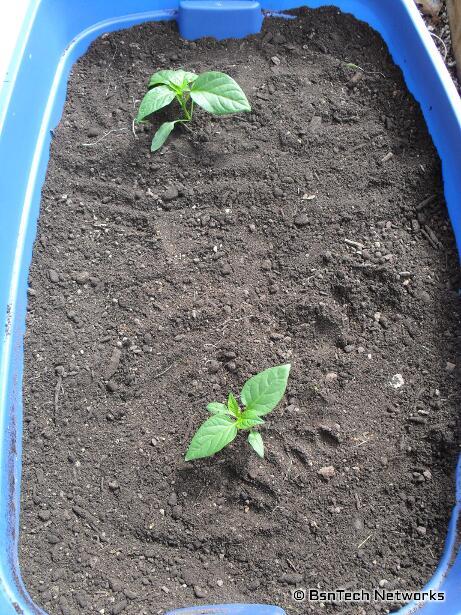 The carrots have also been sprouting – so I took a quick picture of them.  About 150 each of Sugarsnax and Scarlet Nantes have come up so far.  If I remember right, I seeded about 520 carrots total. 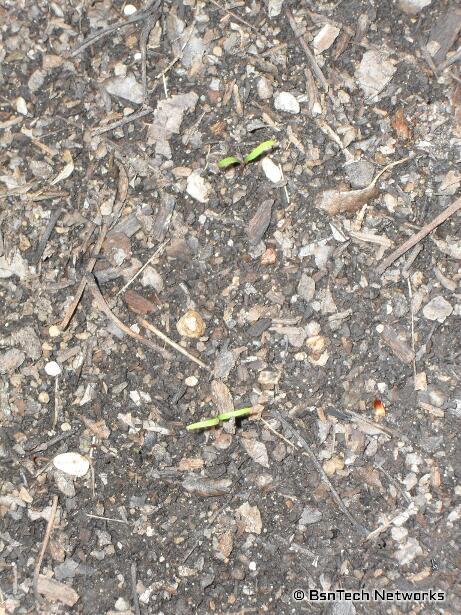 The are that I dug out by the house – which will be used for watermelon – was also filled in with compost from the compost facility.  You can also see some of the black containers that the potatoes were planted in. 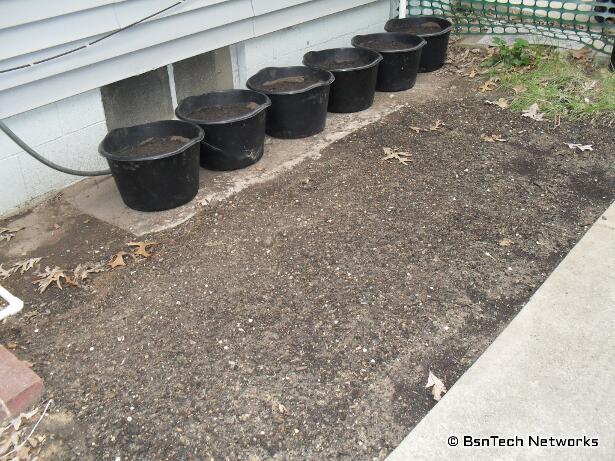 The compost doesn’t look all that great.  I wonder if they have mixed clay into this at the facility.  The very first batch of compost I got had horse manure in it (front garden right by the driveway – and the back garden).  But, it seems like the areas that have been filled since (like the second part of the front garden) haven’t faired as well.  I guess we’ll see this year what happens.

But, the story also holds true – here you can see how well the celery is doing near the front of the picture compared to the back.  The front is where the “good” compost was put in three years ago. 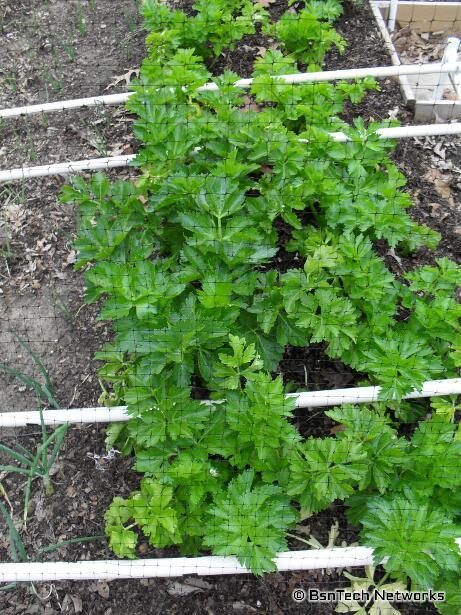 But, the onions don’t seem to mind and are doing well across the whole area. 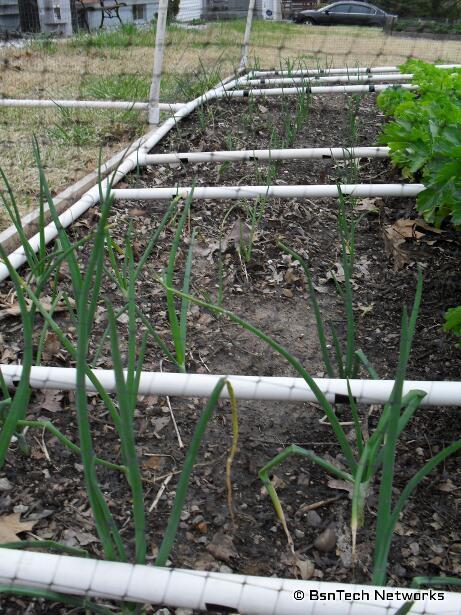 Here is the whole picture of the front garden.  After the tomatoes and potatoes were all put in on Sunday, the deer netting was then put around the area.  I’m just using 1/2-inch PVC pipe to hold the netting up.  Looking at the celery – can you spot where the “good” and “bad” compost is?  Seems very prevelant. 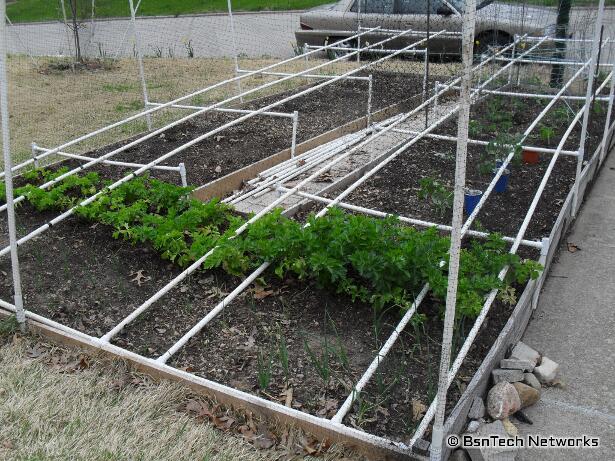 More pictures – let’s look at the strawberries!  They are beginning to bloom already. 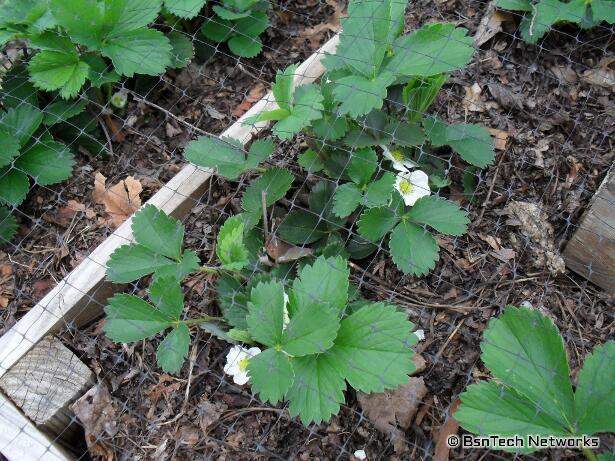 The Granny Smith Apple tree is also in bloom. 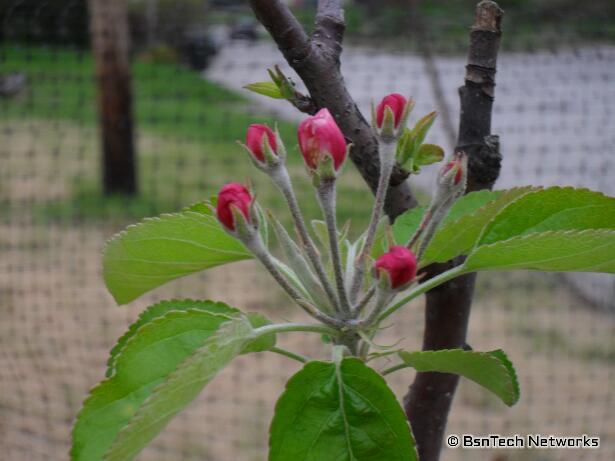 The grape vines are also budding out. 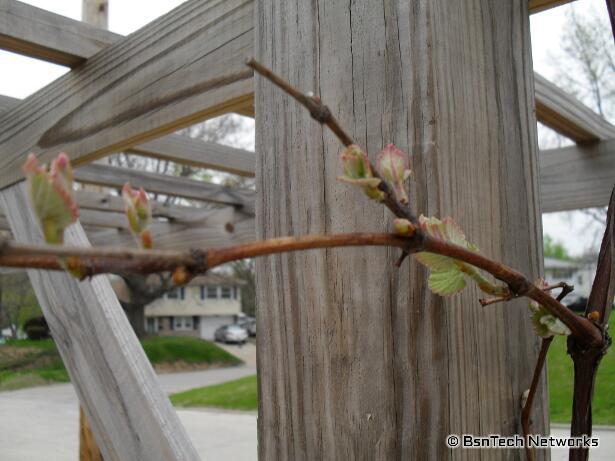 The side garden is moving right along with the broccoli, cauliflower, and peas planted.  A row of potatoes were put right down the middle. 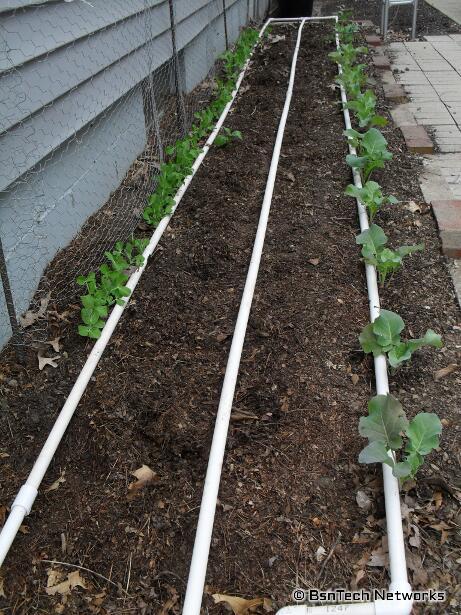 I’m surprised how much the oregano has taken off!  This is just one plant – and last year, it was pathetic to say the least – but, it was the first year.  Now, it is starting to look great – and we might be able to get some oregano for drying soon! 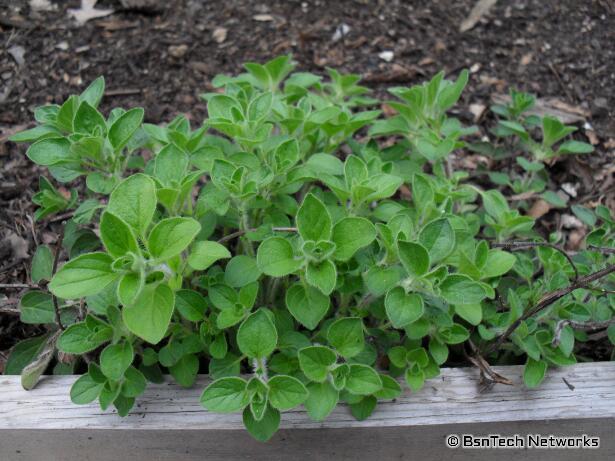 And – the salad just keeps on growing!  Six days ago today, I planted two “holes” with four seeds each of Simpson Elite, Buttercrunch, Red Salad Bowl, Parris Island, and New Red Fire Lettuce.  Some of them have finally came up through the soil.  I’m not sure if I did my succession planting strategy very well for these lettuce plants.  It certainly seems like there is a lot of lettuce below, but it has taken between five and seven weeks for these plants to get to the sizes they are. 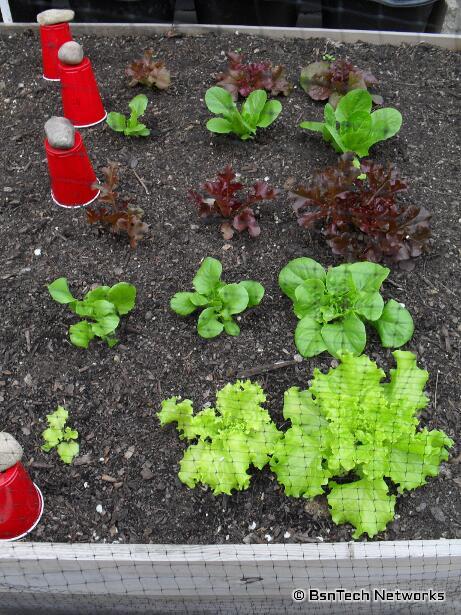 OK – well, that takes care of all the good news.

Now – for the stuff that ruined my mood.

Got home after work yesterday and as I was pulling into the garage, I noticed that the rain barrels were somehow pulled away from the garage!  Holy Moly!  So I parked the car and inspected and I’m extremely lucky.  When I made the rain barrel system, they are sitting on two “rails” of wood that are split in two.  There are two rails that are 12-feet long that hold up the first six barrels towards the back of the garage – then another two 12-foot rails that hold up the second set of barrels.  Well, the first set of rails were the original six that were put up.  When I expanded the system, I added the second set.

With all the rain we’ve had recently, the barrels were completely filled up – so I had over 660 gallons of water.  That is about 4,000 pounds of weight on each rail “set”.  Well, the first “set” was just fine – no problems – but the second set was in dire need of repair.  Right at the end of the garage, the barrels had leaned about ONE FOOT away from the garage!  I’m extremely lucky that the whole thing didn’t come tumbling down.  On the other side of the 12-foot rails, they were moved maybe a couple inches a way from the house – so it was much worse towards the end. 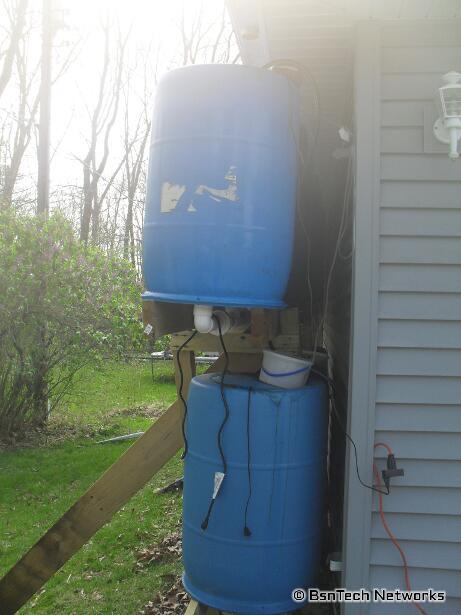 Just by looking at the picture above, you can see the bottom barrel and how it is snug against the wall – and you can see just how far the top barrel was moved.  Not pretty!  So, we were expecting some massive storms (and massive they were) last night – so I sped up to the home store and got two bags of quick-set concrete.  Before I left, I started the process of emptying everything.  Got back about 5:30 and they were still emptying. 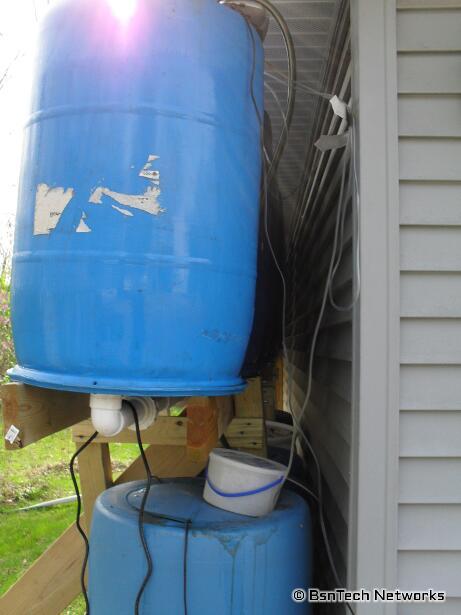 Finally a bit after 6:15, they were drained.  I had two hoses draining them and it took almost two hours.  I then put some boards up in my attempt to straight the posts out, but they still are not fully straight.  I fear that this sytem may eventually come tumbling down.  I then tried to fill in the “ruts” that the posts left behind from moving and made large mounds of concrete around each post.

I got done just a little after 7 pm.  It was already starting to lightning and just as I walked into the patio – the extreme high winds (over 60 mph gusts) and pouring rain started in.  Great – concrete needs some time to set up and with all that rain, I was afraid it would wash away the concrete.  Not to mention – because of the rain, it was also refilling the barrels to add all the weight back!

But, when the storm cleared and I looked this evening, everything still seems OK and the barrels are still “snug” against the house. 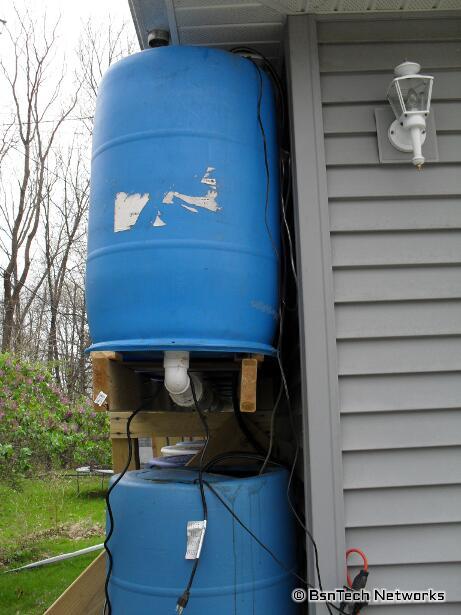 See the difference in how close the top barrel is now that it has been set back in place?  I’m absolutely amazed that it simply didn’t not completely fall over with 4,000 pounds of weight on it. 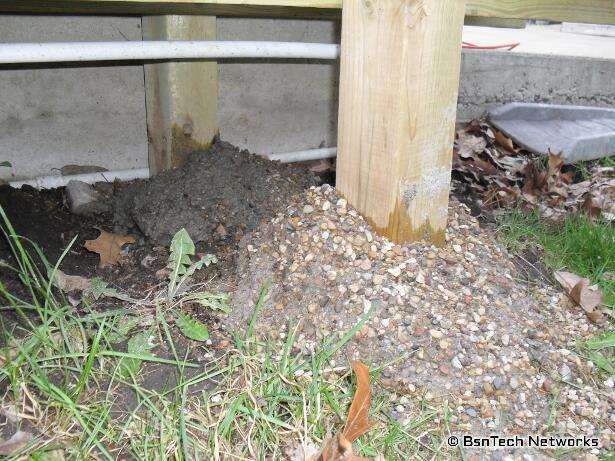 And, you can see my attempt to cake concrete around the posts.  Because I only could fill the “ruts” that the posts made in the ground, I also put the concrete around the posts to build them up.  Short of taking down half of the entire system, pulling all the posts out (if that would even be possible), and re-digging the holes to fill with concrete, this was the best I could do – especially giving the limited timeframe with the storms coming in.

Lesson learned – ALWAYS FILL post holes with concrete.  NEVER fill them back in with soil.

Alright, that crisis was averted.  Now, for the next one.

Because of the storms, it was almost 80 degrees before the storms came in.  Afterwards, it dropped into the 40’s.

Woke up that morning and the temperature said 37 degrees!  Oh my.  First thought – tomatoes are dead.  Of course, since I had to get to work, I didn’t have any time to dig them up.  The temperature only made it to 45 degrees today – and the lows again tonight are going to be in the low 30’s.

So, lesson learned again – WAY too early to plant tomatoes.

I dug all of the sorry-looking plants up and put them in one-gallon buckets.  Certainly hope they pull through because eight weeks of growing would have been wasted. 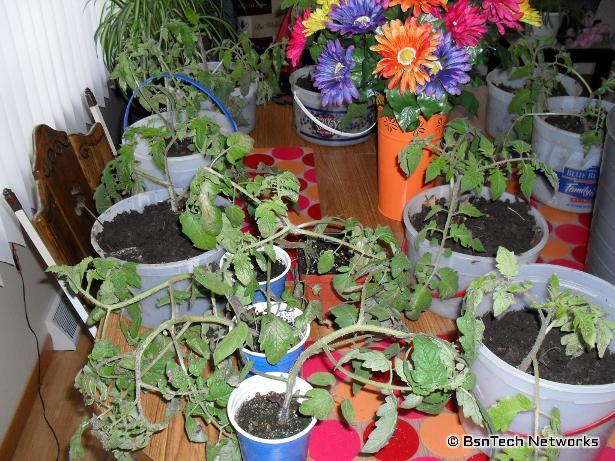 So, two lessons defintely learned from this week.  Even though the temperatures were only getting in the mid-40’s at night for the past few weeks, things can change drastically.  And, never put posts in the ground and back-fill with dirt – especially when you are holding up two tons of weight.