Today I worked on the garden plans for 2010.  This year I am placing emphasis on the items that we eat more often than those that we don't.

As an example, I have discovered that we are not eating many of the sugar peas that were grown.  We grew over 10 pounds of sugar peas and we haven't used many of them at all.  I made a dish last night that had peas in them – but still that was maybe only about a pound of peas.  So the peas will be reduced by about 60%.

In addition, the cauliflower didn't produce well this year and was a waste of space.  The bag of cauliflower is still in the freezer and hasn't been opened!  Same is the case with the broccoli – just not used very often although the yield was fairly well (although not worth the pound-per-square-foot of garden space).

I am also having to rotate some of the items this year.  The tomatoes have always been grown behind the garage (for the past three years now) – so I am moving them to another location.  I will be planting one more tomato this year as we have been going through the sala mix we made very quickly!  This year two each of the Best Boy, Roma, and Cherry Tomatoes were planted.  Next year there will be an additional Best Boy tomato planted instead of two Cherry Tomatoes (I would plant maybe two more, but I don't have the space in this bed).

Potatoes will be grown much more heavily than before.  I was quite happy with the amount of potatoes that grew – although I wasn't happy with the potato bin.  I plan to put in about 40 potatoes whereas only about 13 were planted this year.

Peppers will be cut back by two – only six will be planted next year instead of eight.  We have quite the load of peppers that we may not use fully.  We also gave at least 15 pounds of peppers away to the neighbor as well.

Lettuce will be planted in succession.  I will plant one row (one row is six plants) every three weeks.  Hopefully this will give us a more plentiful supply throughout the year.  I have also been debating about planting Buttercrunch lettuce in with the Black Simpson Elite lettuce for a little bit of variety for next year.

I planted out six cucumbers this year but only two came up.  For that reason, next year I will be starting almost everything indoors to ensure that all of the garden space is used instead of having holes here and there (had only about 50% germination rate with the green beans even!).  Carrots, onions, and potatoes will be the exception to this.  By starting them indoors, I will use about 150% more seed than I need to reach what I will plant outside to ensure that I have enough seedlings to transplant.  I may have several that I will have to add to the compost pile afterwards or maybe give to my parents for them to try – but I want to ensure I maximize all of the space used this year.  Most of the garage garden (garden behind the garage) wasn't used this year since the cucumbers didn't come up as expected.

So, here will be the setup for next year – at least as it stands now.  I may change up some items.  Here is a full picture of the previews below to get the whole picture.

Color chart to show what is planted where: 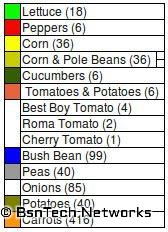 Below is the other portions of the garden.  The driveway garden was the one built early in the spring and it has the potato bin in this raised bed.  Next year I believe that the potato bin is going to be full right from the start.  The bottom will have one foot of regular soil and the other 1.5 feet will be leaves that I have set aside from mulching this year.

The house garden will have the tomatoes (this is where the onions and peas were this year) and the peas in them.  The garage garden will continue to have the cucumbers like they did this year – but will also have bush beans and potatoes planted in this area.