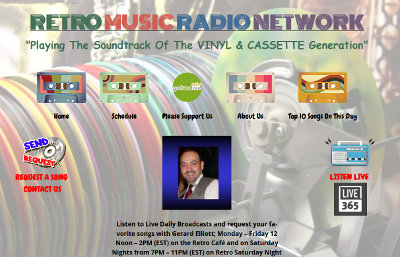 Gerard contacted us about a month ago inquiring about website services.  He owns an online radio station and wanted to put together a website with other features to offer his listeners.

We provided Gerard a fully itemized quote for his website design needs to help him understand the total costs involved for his request.

After a few weeks, Gerard proceeded to move forward. He initially wanted to get a simpler site put together and potentially expand the site to include some of the other features (like selling merchandise) later on.

Gerard was instrumental in providing us what he wanted on the site.  He made a picture of how he wanted the site to look – which we followed exactly to his specifications.  He also provided us the fonts for each of the items on the site and all of the information.

Within about 72 hours of the initial payment, the site was fully completed and approved.

Retro Music Radio Network is now online and broadcasting!  Their website is at retromusicradio.net.