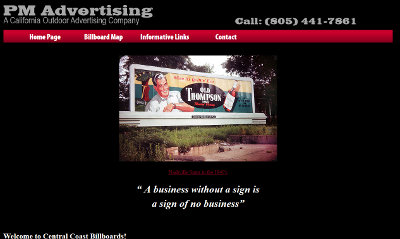 Bill, a contact on behalf of Central Coast Billboards, contacted us requesting some assistance.  Bill was referred to us by Tom Templeton, the owner of Classic Signs in San Luis Obispo.

Tom gave BsnTech Networks a glowing recommendation to Bill about our responsiveness and ability to get the job completed quickly.

Bill’s customer, Central Coast Billboards, was in the same situation as Tom was – their hosting company just up and closed with absolutely no notice.

Just like Tom, we were able to recover the website for Central Coast Billboards.  Once Bill placed the order for us to get the site restored, we had it up and running with in 48 hours.  The contact form also needed to be re-programmed, which was also done in the same timeframe.

Bill also notes that he has at least one other customer that is in the same position and most likely will be having us do the same for their site.

We appreciate the business from Bill and look forward to additional projects!