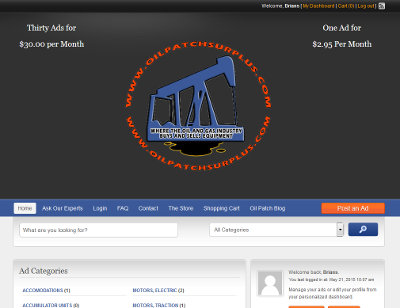 Steve, the owner of Oil Patch Surplus, has contacted BsnTech Networks on several occasions for assistance with his website.  BsnTech took up the challenge to fix some problems with his website and built a great relationship with him, especially since he had several other freelancers in the past that took his money and ran.

At BsnTech, we strive to provide reliable and responsive website and graphic design services.  With us being in business since 1999, we are a trusted service organization for those needs.

Because of the reputation we had with Steve, he opted to also have us host his website.  He was paying his previous provider $30 per month for website hosting – and his website was on servers that were slow and caused longer load times for his website.

Once the order was placed, we took care of copying Steve’s website over to our systems and set everything up for him; a completely hands-off approach so he did not need to transfer the site.

Now, his website is almost twice as fast as it once was with his other provider – all at 1/3 of the monthly cost.  Why is our speeds faster?  Because we will only load a maximum of 100 customers on two servers.  We also use solid state (SSD) drives which are more than five times faster than typical platter drives.

We appreciate the continued business from Steve!

The Oil Patch Surplus site is at oilpatchsurplus.com.