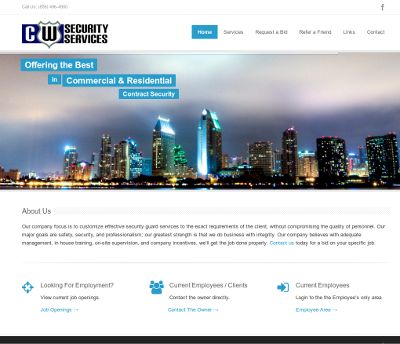 BsnTech Networks received a phone call from Clayton, the owner of CW Security Services out of San Diego, CA.

Clayton initially needed some work from our graphic designer to modify a graphic he had.  During the conversations, we understood that his website was also down with a notice of suspension.

Wayne noted that he attempted to contact the previous web designer several times but he would not return phone calls or e-mails.  Originally, the web designer created the site and provided website hosting for two years.  Unfortunately, his hosting service was suspended with only a year of service used.

We worked immediately with Clayton to find out what we could do for him.  We were able to get into the website and do a full website backup.  In addition, we tracked down his domain name.  We then took everything and combined it with us – one service organization and one easy invoice for Clayton to handle.

Within a few hours, the website was transferred over to BsnTech Networks and was up and running!

Clayton has informed us that he plans to have us do some changes to the website in the near future as well.