Back in February, we began making our own wine.  I wanted to experiment a little bit first before the grapes begin to produce their fruit – which will be used to make wine as well.  The grape vines still have about three more years before getting any decent amount of fruit.

So, we started off using Welch's Grape Fruit Juice.  One thing to note when buying grape fruit juice for this purpose is that it cannot contan any sorbate.  This hinders the yeast from growing and therefore you cannot make wine from the fruit juice.

We purchased five gallons of grape fruit juice.  After putting it into a plastic carboy – known as a "Better Bottle", we then had to mix in quite a bit of sugar.  Although I do not remember how much sugar was used, the specific gravity (measured with a Hydrometer), was approximately 1.105.

The yeast we used – Red Star Montrachet – is known to have a weakness with too much over 1.10 specfic gravity.  After mixing in the grape fruit juice, the yeast, and sugar, we let the solution sit in the Better Bottle for about 2.5 months.  On top of the Better Bottle, you need to put a cap on the top in addition to an airlock.  This prevents any oxygen from getting into the container and contaminating your wine.

It is also VERY important to ensure that all of the tools and containers that come into contact with your solution is very well sanitized – I used Five Star StarSan for this purpose.

While not required, I also added five campden tablets (basically this is Potassium Metabisulfate) into the five gallons of solution as well and mixed it in.  By adding the campden tablets, it helps the yeast compete against any other bacteria – if any got in without proper sanitation.  Stir everything in very well and then place your cap and airlock on. 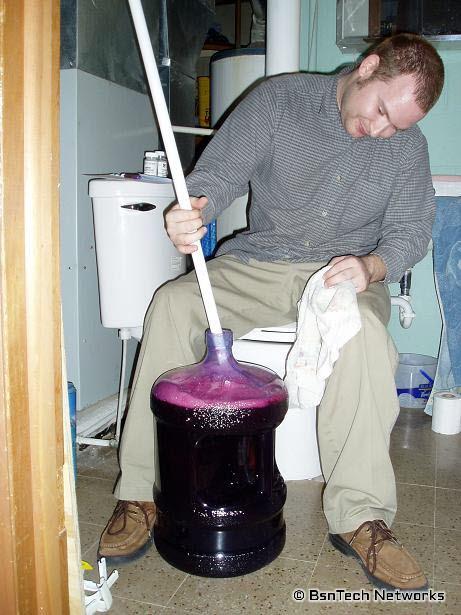 We went to a place in Maryville, IL – William James Trading – that sold wine and beer brewing materials.  While we were there, we purchased a REAL Better Bottle (the one shown above is just a five-gallon water container), a mixing rod that connects to a drill for quick mixing, a few chemicals that would be needed down the road, more yeast, and a five-gallon "Ale Pail" bucket.  The first order was done through Leeners onlne for a few items to even get this far – such as the campden tablets, yeast, and a few other items like some clear tubing.

After a few months, I went back to check since the air lock was only bubbling once about every two minutes.  While I could have let it go on longer, I decided this was enough.  I did another specific gravity reading – and this time it was at 1.007.  I have been told that to find the alcohol content, you simply subtract the beginning measurement from the ending.  So:

That represents 9.8% alcohol by volume.  While that isn't exactly a perfect match, its good enough to go off of.

After this, the folks at William James told me that I should add one campden tablet per two gallons and one teaspoon of sorbate per two gallons.  We crushed up the campden tablets, poured the sorbate in, and really stirred it up good.  You have be careful though – because it really brings up the carbon dioxide out of the wine – and to the top – almost like shaking up a can of soda and then opening it!

After adding that all in, we then put the cap and air lock back on.  We waited a week and there was zero activity with the airlock – which means it is ready for bottling.

The reason you add the campden tablets and sorbate to the finished product is to kill off any remaining yeast and bacteria in the wine.  If there is still yeast in the wine after you bottle it, your bottles will explode and make quite the mess!

So today, a week after adding the stuff, we bottled the wine.  It made four gallons and 1.5 liters.  We opted to buy the 1 gallon jugs from the William James Trading place – because I didn't want the extra expense of buying all of the bottles, corks, and a corker for this first time.

As funny as it may sound, we also filtered the wine when bottling it.  When I took the last specific gravity measurement with the Hydrometer, we noticed there was a lot of sediment in the container.  So, we racked the wine from the Better Bottle into the five-gallon Ale Pail.  There was a huge amount of sediment left on the bottom, but that still wasn't good enough for me.  So, I got an old powerhead from a fish tank (it was very well cleaned first) and we put a coffee filter over the intake.  After we filled each gallon jug, we changed the coffee filter.  It was a very inexpensive way of filtering the wine – instead of buying one of those $200 wine filtering systems.

So, we now have quite a lot of wine to drink!  It will hopefully be in storage for a few months, but right now it is quite sweet but has a kick to it as well.  We usually drink a Lambrusco series of wine around the house, but our wine isn't as sweet as Lambruso, but has a higher alcohol content. 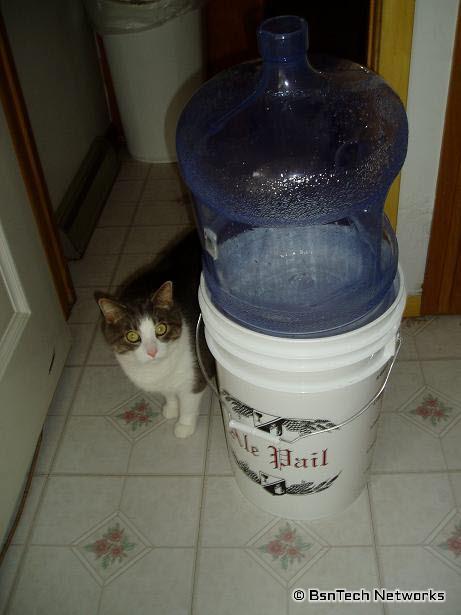 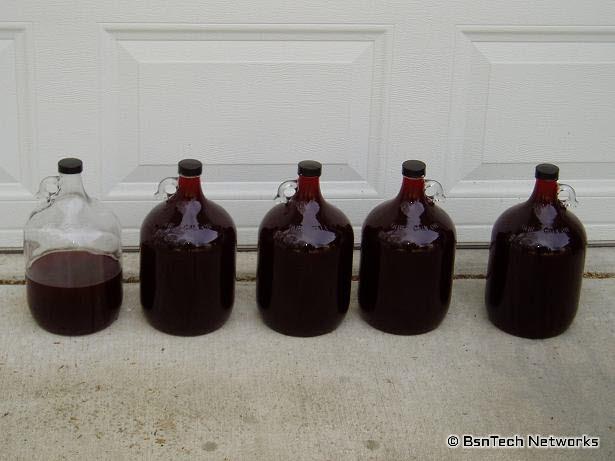